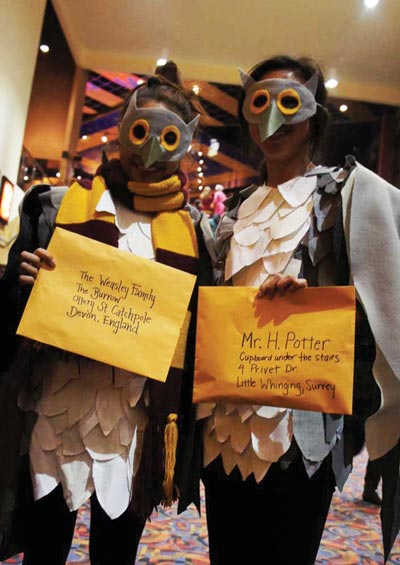 After a decade-long love affair with “the boy who lived,” fans of the Harry Potter series anxiously awaited the final installment of the eight-part film series. While many had to wait until 12:01 a.m. on Friday, July 15, to see how the film adaptation of the beloved book played out, a select few fans were able to not only see Harry Potter and the Deathly Hallows Part 2 four hours early, but watch it in IMAX 3D thanks to an event put on by Wikia.

Wikia, a website founded in 2004 by Jimmy Wales of Wikipedia fame and Angela Beesley, is home to nearly 200,000 communities on everything from Star Wars to solar cooking. According to Wales, Wikia is “where communities of passionate fans come together.” One of Wikia’s more passionate fanbases, is the Harry Potter community and Wikia wanted to support the group by doing something special for the final chapter of the Harry Potter saga.

“Last year, we raffled off tickets to the midnight showing of Harry Potter and the Deathly Hallows Part 1. We wanted to support our Harry Potter Wiki fan base and gave away tickets through an online contest. Since the Harry Potter Wiki community has grown, and because of all the excitement surrounding the final installment of the Harry Potter movie series, we decided to go all out this year,” said Wikia Communications Specialist Hannah Simon. “By throwing this event, we could reach out to the community as well as potentially recruit new Wikia users – we wanted to encourage people to visit the wiki, if they hadn’t heard of it, because we knew they would enjoy interacting with other Harry Potter fans.”

As fans arrived at Santa Clara’s AMC Mercado on July 14, many of them dressed as their favorite Potter characters, Wikia’s “Sorting Hat,” a light brown witch’s hat full of Gryffindor, Slytherin, Ravenclaw and Hufflepuff stickers, sorted attendees into one of the four Hogwarts houses. As 8:15 p.m. neared, the theater was filled to capacity and members of the Harry Potter community were giddy with anticipation. Wikia’s Social Media Coordinator Nathan Blonkenfeld made a welcome speech and discussed the site’s current promotion of sending two “muggles” to Orlando to experience The Wizarding World of Harry Potter. He then invited the entire crowdto “summon the film” by asking everyone to raise their wands and say “Accio Harry Potter.” And, with that charm, the film began.

The crowd erupted in applause and approval as Potter’s final journey started. Throughout the movie, cheers were heard and tears were shed as Potter and the Dark Lord Voldemort had their final confrontation. While in many parts the film strayed slightly from the book, no one seemed to mind and many felt the differences added to the journey. “Everyone said they had an amazing time and really appreciated seeing the movie four hours early!” said Simon.

But is this the end of Harry Potter?

“The Harry Potter Wiki community, and Harry Potter fans in general, still have many things to discuss. “Fans are continually reading and re-reading the book, discovering J.K. Rowling’s hidden meanings, foreshadowing that they didn’t catch on the first, second, or third read, connections between characters, and histories of the character in the book,” said Simon. “Fans never get sick of chronicling all the spells listed in Harry Potter and perfecting the definition of magical creatures and other wizard folklore. And now, with the release of Pottermore on July 31, there’s going to be a lot of talk in anticipation of the release – and then after the release. I’m sure fans will be sharing their opinion of J.K. Rowling’s newest venture. Pottermore claims to be an “online experience around the reading of Harry Potter books” so you can bet that the already Internet savvy wiki community is going to dive right in. I doubt that the Harry Potter Wiki will ever ‘die out.”

Many fans are still crying for more Potter and there’s been some talk of a spinoff involving Neville Longbottom. But the Potter community will just have to wait and see what Rowling has up her sleeve. Either way, it’s guaranteed to keep Potter fans salivating for awhile.

Harry Potter and the Deathly Hallows Part 2 opened to rave reviews and smashed previous box office records. It is poised to break the one billion dollar mark in worldwide ticket sales. Additional information on Wikia including rules for the Wizarding World Giveaway can be found at http://harrypotter.wikia.com.

Midnight in Paris / Rated PG-13 for smoking and time travel