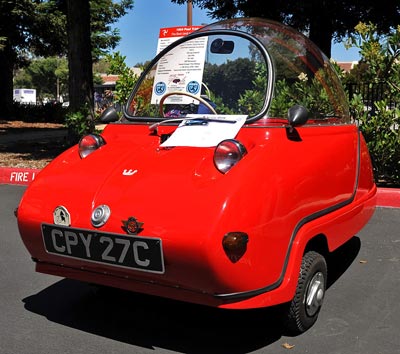 The 5th Annual Intel Car show was held on Wednesday, July 20 at the Intel Campus at 2200 Mission College Blvd in Santa Clara. The show featured a wide variety of cars, trucks and motorcycles. The only requirement of the attendees was a willingness to have fun and take a slightly longer lunch to view other cars and have their cars ogled. The cars ranged in age from the 1930s to cars driven, literally, off the showroom floor.

In 2010, the show had over 90 cars and this year’s show easily surpassed that number. Some of the cars have been seen at the show before, while others were making their first appearance. The show featured many familiar sounding marques such as BMW, Jaguar, Fiat, Lotus, Ferrari, Bugatti, Pontiac, Chevrolet, Lamborghini, Porsche, Lexus, Saab, Nissan, Ford and Honda as well as some lesser-known marques, including Nash, Peel, Tatra, DeLorean, Pierce-Arrow and Cord as well as eco-friendly cars from Chevrolet, Nissan, Lexus and Porsche and Tesla. The show is very informal with no fees to enter, no prizes awarded, no judging of the cars and no pressure on owners to make sure their car was in the best condition possible. Each participant was well-treated by Intel and received a welcome packet that included a ticket to a free BBQ lunch, along with free frozen yogurt provided by Intel from Pinkberry (located in Santa Clara), an Intel bag and a 35-ounce bottle of Griot’s Garage Waterless Spray-On Car Wash.

Amazingly enough, even with the likes of a Ferrari F430, Bugatti Veyron, Lotus Evora and Audi R8, some of the lesser-known cars stood out from the crowd. Among them was a 1964 Peel Trident manufactured by Peel Engineering, on the Isle of Man. The Trident weighed in at a lightweight 200 pounds while delivering over 80 US miles per gallon, which led to the advertising motto of Almost cheaper than walking. That incredible fuel mileage came at a cost of a top speed of a bit over 40 miles per hour. When new, the Peel Trident sold for $760 and the biggest drawbacks were the Sauna-Like Interior and Uncontrollable Mirth. The cause for the warm interior and all that mirth was because instead of doors and a roof most people are familiar with, this diminutive two-seater instead sported a clear plastic bubble covering the driver and passenger compartment. The bubble afforded excellent visibility with absolutely no blind spots, but driving the car on a hot day was something most people wished they never had a chance to experience.

Another car hardly ever seen in the US was a 1951 Tatra T-600 (also known as Tatraplan), made in Czechoslovakia, which featured a four-cylinder, air-cooled rear engine and a unique aerodynamic design. Other notable cars included a 1959 Fiat 600 Multipla, which many people consider to be the first mini-van ever produced. But no car show would be complete without a Nash Metropolitan. In this case, a 1956 Nash Metro which delivered up to 40 miles per gallon.