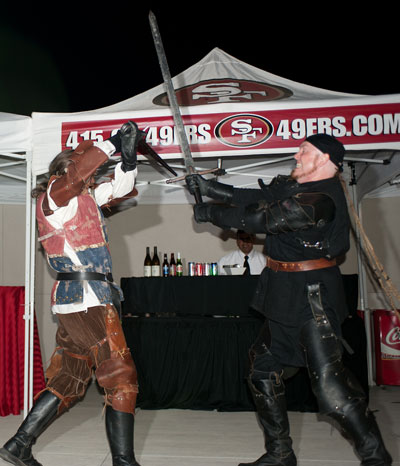 For years, Santa Clara has been known as the “Can-Do” city. Whether officials in neighboring cities admit it publicly or not, Santa Clara seems to have a way of getting things done. That attitude was on display on Saturday, July 14, at the Evening Under the Fireworks with the San Francisco 49ers, the first event put on by the newly formed Santa Clara-based non-profit, the Santa Clara Performing Arts Foundation.

In her first speech as the founder of SCPAF, Carolyn Schuk delved into the city’s history – “The City of Santa Clara has a long history of active support of the performing arts. In 1961, the Parks and Recreation Department helped a Santa Clara resident named Roberta Jones to start a theater group. That group went on to become the Santa Clara Players, now in its 50th season. In 1972, two San Francisco dancers Benjamin and Josefa Reyes opened a ballet school in Santa Clara to pioneer their vision of community performing arts. The Santa Clara Ballet’s annual Nutcracker is part of the city’s annual holiday festivities.

“In 1996, Sharon Kaye’s Mission City Opera brought fully-staged opera to the city. The company not only put on professional productions…but in 2009, it premiered a new original opera, Michael Taylor’s Truce of Carols.

“In 2001, the Santa Clara Unified School District invited the Festival Theater Ensemble (FTE) to perform its annual summer Shakespeare festival at Full Circle Farm. The company is directed by Buchser High School graduate…Bruce Des Les Deniers, and the company has made Full Circle Farm the first stop for the summer festival.

“Even in a challenged economy, Santa Clara consistently comes up with generous support for all the performing arts. As well as digging into its own pockets, it provides for many other needs – including rehearsal and performing spaces and publicity.

“One SCPAF goal is to carry forward that spirit with equally multi-faceted support for performing arts organizations that advances both artistic vision and financial stability. We’re bringing some Santa Clara outside-the-box thinking to this mission and, next time we’re here, we’ll have some innovative programs in place. Another goal is to make the city a new chapter in the history of ‘Community Performing Arts.’ A city that attracts and retains locally-based performing arts companies with solid and eager audiences, attractive venues and a performing arts destination name….”

Thus started the inaugural fundraiser for the SCPAF. Held at the San Francisco 49ers’ Training Facility in Santa Clara, the event was sold out as attendees were treated to a gourmet dinner prepared by the 49ers chef in their cafeteria. The low-key venue didn’t diminish the festivity as everyone walked away delighted by the food and entertainment from emcee Michael Taylor, baritone Jeff Taylor, a scene from Romeo and Juliet along with a demonstration of combat with broad swords by the FTE and a performance by Sharon Maxwell of Opera Bravura Entertainment. The 49ers Director of Alumni Relations, Guy McIntyre, served as guest of honor. For more information on the SCPAF, visit www.scpaf.com.

Gulliver Travels to the Mission City

Community
Author Diane AndrewsPosted on November 23, 2011
Make a trip to downtown San Jose for Thanksgiving weekend festivities the whole family can enjoy. The 39-year-old Harvest Festival, touted as the antidote...

Community
Author Diane AndrewsPosted on December 10, 2020December 9, 2020
A favorite new holiday tradition for Tom Sullivan is donning his red “I am a volunteer” Salvation Army apron and ringing his red and...
SPONSORED