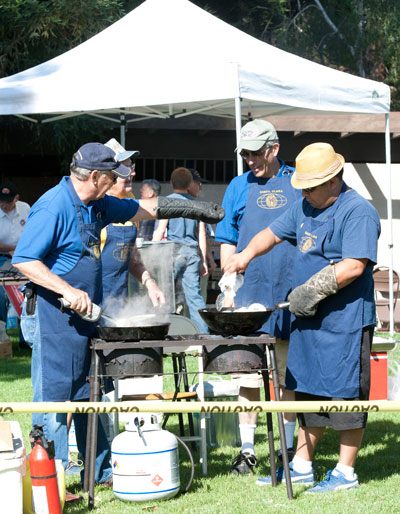 While most people were still sleeping soundly in their beds, others woke up extra early on Wednesday, July 4, for their part in the City’s Annual 4th of July All-City Picnic. Everyone from Kiwanis members to volunteers and employees of Santa Clara’s Parks and Recreation Department to Santa Clara Police and Firefighters made Central Park their early-morning destination.

As in the past and at the City’s Annual Art and Wine Festival, members of the Kiwanis Club of Santa Clara, setup their grills and fry pans and got cooking early to make sure they were ready for the official start time of 10 a.m. Several familiar faces from other Kiwanis events were in attendance, including Al Everett, aka Doc, Earl Marowelli, father and son team Scot and Evan Morton, and Steve Ricossa. Given the importance of making a good show and providing enough food, Roberto Rivera from Pueblo De San Jose Kiwanis was also on hand to help out with sautéing onions. To feed just part of the crowd attending the July 4 All-City Picnic that buy food from the Kiwanis’ booth takes 90 pounds of onions, 400 hamburgers, 500 hot dogs and approximately 500 cans of soda/bottles of water. As Roberto explained, “The money raised goes to help Kiwanis charities so it’s all going to a good cause.”

While the Kiwanis members were cooking and grilling before the official start of the picnic, the Santa Clara High School Athletic Boosters were on hand serving up the fixings of a good, old-fashioned pancake breakfast. The Boosters have been cooking breakfast on July 4 for nearly 15 years. Starting at 6am and working non-stop, Jim Dickerson, Kevin Baltz, Jerry Ogg, Steve Garcia, Randy Rose and others cooked and served nearly 1,500 pancakes. Anyone that might have doubted the popularity of the pancake breakfast, need only to have looked at the line at 9:15 a.m. as it stretched outside the pavilion and down a walkway where hungry patrons waited for their chance to get some of the Boosters’ golden pancakes.

At 10 a.m., with breakfast finished, the entertainment got started and before too long, the Parks and Recreation Dancers came out to dazzle the crowd. The dance numbers are always a crowd favorite as Linnea Sheehy, one of the instructors with the Santa Clara Parks and Recreation Department’s Dance Program, always does a great job with the dancers. If you’ve never seen the various dance groups perform before, you should make it a priority. Sheehy’s dancers, some as young as five-years-old, perform as though they’d been born for the stage. The numbers performed included the Yankee Doodle Dancers (tap), Titanic (ballet); You’re a Grand Old Flag (Hip-Hop dancers), Swinging on a Star (Pre-ballet) and Baby (Hip Hop dancers).

Entertainment also included performances by the Cocktail Monkeys performing hits from the 80’s, 90’s and today, along with the Santa Clara Vanguard Cadets and the Groove Kings a “dance party machine.”

Community
Author Press ReleasePosted on September 28, 2022
The 53rd Santa Clara Parade of Champions will hit the streets of Santa Clara on Oct. 1 at 11 a.m. But, don’t show up...

Community
Author Cynthia ChengPosted on September 27, 2022
On Sept. 10 at the Community Recreation Center was the City of Santa Clara’s State of the City and Community Awards, which recognized outstanding...