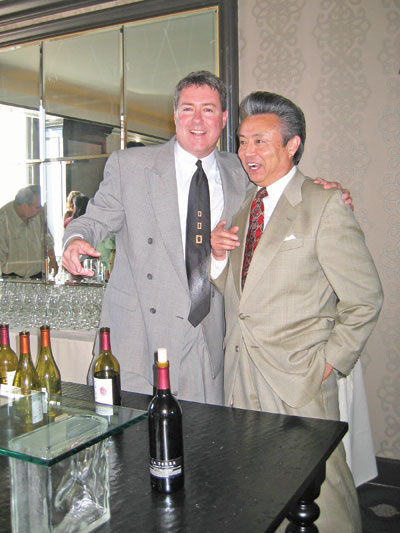 “Silicon Valley Capital Club gives back to the community by hosting a celebrity bartending event for a community-based organization every month,” said Chris Chang Weeks, development manager at the Triton. “Paul Lukes, a Triton Board member, and Frances Felich, event coordinator at the Capital Club, recommended that the museum be a recipient for one of these events. [It‘s] a great social event where board members invited their friends, as well as supporters of the museum.”

Matthews, Moore and Bono were chosen for their ties to the community. “The Triton Museum of Art chose celebrities who specifically work in Santa Clara and significantly contribute to the overall quality of what makes Santa Clara such a great place to live. Naturally we thought of our mayor and the city council members as well as the San Francisco 49ers. Mayor Jamie Matthews and Councilmember Kevin Moore graciously accepted our invitation. Steve Weakland was the instrumental person at the 49ers who arranged Steven Bono to be the third bartender,” said Chang Weeks.

Approximately 150 people attended the event, with the Capital Club donating some of the wine served. With no entry fee, the only fundraising efforts came in the form of bartender tips. And, after the last glass of wine was poured, the Triton netted over $700.

“All the money that we raised will be used for the exhibition and education programming at the museum,” said Chang Weeks. “Admission and parking at the museum are free. We provide outstanding exhibitions that focus on Bay Area artists, offer classes to children, youth and adults six days a week, and host several free community events throughout the year, including Family Art Days, Midsummer Art Celebration, [and the] Holiday Gift Fair.”

The Triton‘s next fundraiser is the Fall Floral Festival on October 20 from 6:30 to 8:30 p.m. where floral designers will interpret art from the Triton‘s permanent collection. Admission is $50 per person and includes light hours d‘oeuvres, wine, beer and soft drinks. The creations will be on display at the museum October 21 from 11 a.m. to 5 p.m. Admission will be $5.

Daughters of the Golden West Award

Community
Author Erika TownePosted on June 10, 2020June 18, 2020
The streets of Sunnyvale were filled on Friday, June 5 when thousands turned out to participate in a peaceful Black Lives Matter protest. The...

Community
Author Santa Clara WeeklyPosted on August 15, 2019
The following is a list of events happening in Santa Clara and throughout the Silicon Valley. Want to share an event to be featured?...

Community
Author David AlexanderPosted on May 11, 2016
There are more than 1,200 electric or hybrid cars on the road in Santa Clara. The opening of a new 49-port charging station –...
SPONSORED