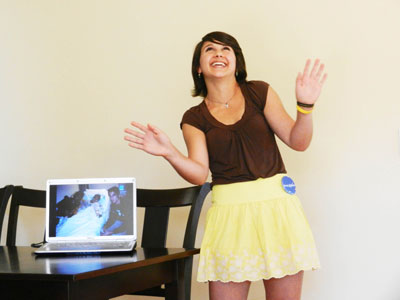 At 13, Melinda Marchiano came face to face with the answer for why she had felt worn out during a recent family trip. The dancer was faced with a harsh reality – Hodgkin’s lymphoma. A softball sized mass that sat in her chest made it difficult for the teen to live a normal life. Faced with a diagnosis no child should receive, Marchiano underwent a series of four rounds of chemotherapy and lived to tell the tale.

As the survivor spoke to a small group at JW House on June 18, her mother, Lee, stood in the back corner. During Marchiano’s discussion in which she shared photographs and stories from her experience in and after treatment, Lee gazed proudly at her daughter. Although the battle encompassed the entire family, it was Marchiano’s mom who kept her daughter together at her darkest moments.

Marchiano’s treatment, recovery, and survivorship is chronicled in her book, Grace: A Child’s Intimate Journey Through Cancer and Recovery. Through the Make-A-Wish Foundation, Marchiano is embarking on a journey to share her battle with cancer and her love of dance with others.

Throughout Grace, Marchiano, rather candidly, describes her thoughts during the process of dealing with the disease. “As far as I was concerned, crud could mess with my body, but nothing could take over and control my spirit,” writes Marchiano. “That was comforting to me, knowing that whatever physical torment I had to go through, it was just my body and not my soul. Like an old boyfriend, I was so over my body.”

As Marchiano went through treatment, she never once mentioned anger or hatred for her condition. Instead, she tackled each challenge and used her determination to make it through another day. “So I focused on the smaller goals. Actually, with cancer, the end of each day is a goal, and waking up in the morning is a victory. You literally take it, not day by day, but minute by minute, second by second,” writes Marchiano.

With each victory, each passing round of chemo, Marchiano greets her next challenge with sarcasm and wit. Grace becomes a heartfelt journey that finds readers glassy-eyed one minute and chuckling the next. She never asks for pity, but instead wishes good will for those around her.

But it all changed when Marchiano was deemed cancer-free. Once the fighting had ended, Marchiano struggled to find herself and quickly fell into the depths of depression, which included a severe eating disorder.

At 79 pounds, Marchiano was slowly killing herself instead of fully embracing a cancer-free life. And, at Marchiano’s lowest point, her embattled mother saw anorexia as a new challenge to conquer.

“We’re going to get you better! And I’m going to get tough, but I want you to know it’s not you who I’m going to get tough with, it’s Mr. Stupid (the voice inside Marchiano’s head telling her not to eat)! That frickin’ liar. I’m going in after him! I’m doing it because I love you. He can no longer live in you…I won’t let him,” Marchiano writes, recalling the moment her mother took control over the disease.

Through therapy, family, faith, and dance, Marchiano conquered her disorder.

“I’ve had 48 doses and 16 days of chemo, well over 50 tests, a trip to the ER, two doses of morphine, three drug reactions, 41 shots, over 150 needle pokes, 14 days of radiation, an eating disorder, a mass the size of a softball, a PICC line, a port, two biopsies, a bone marrow aspiration, total hair loss, nine months of intense therapy, and so many doctor’s appointments that I lost count a year ago…My heart is filled with a nearly indescribable feeling at this moment. It can only be described with one word…grace,” writes Marchiano.

Marchiano recently graduated from high school and plans to attend Pepperdine University in the fall with the intent of becoming a pediatric oncologist. For information on Grace: A Child’s Intimate Journey Through Cancer and Recovery, visit http://site.happyquail.net/.