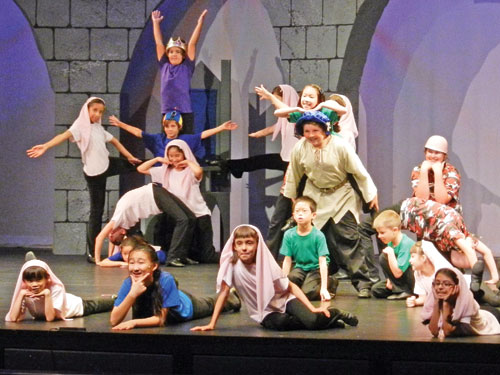 There’s a giant on the loose in Lilliput!

As the kingdom unites together to find out if the giant is friendly or there to destroy the county, their relationship with neighboring Blefuscu continues to be strained. After being Lilliput’s “dumping ground” for criminals and unwanted people, Blefuscu has had it with Lilliput’s antics and plans an attack. The kingdom must use the giant as a “weapon” in order to keep their independence – luckily the giant is a willing participant in the king’s and queen’s plan.

Such is the basic plotline of the Roberta Jones Junior Theatre production of the Ben Finn penned play, Gulliver’s Travels. Based on the book by Jonathan Swift, the Finn;s adaptation differs in that it only follows part one of the book and ends without Gulliver enduring a trial.

The play, which is being performed at the Mission City Center for Performing Arts July 24-26, stars Michael Kennedy as Gulliver, Andrew Melnick as the King of Lilliput, and Emma Franzen as the Queen of Lilliput.

While Kennedy did well as the lovable giant, it was Melnik and Franzen who stood out in their performances as the rulers of a kingdom under attack. In particular, Franzen dished out some of the musical’s most comical lines and perfectly portrayed the pretentious queen.

With catchy songs, cute dance numbers, and a large cast of children ranging in ages from eight to 18, Gulliver’s Travels is an entertaining and enjoyable event that’s fun for the whole family.

Gulliver’s Travels has two performances remaining – tonight and tomorrow at 7 p.m. Tickets are still available and are $8 for adults and $5 for children 18 and younger. Mission City Center for Performing Arts is at 3250 Monroe Street, at the corner of Calabazas in Santa Clara. For additional information or to buy tickets visit www.rjjt.org.

Roberta Jones Junior Theatre will next perform “A Night Off Broadway,” a talent show and fundraiser for the theatre, on August 18 at 7 p.m. Tickets are $8 for adults and $5 for children 18 and younger and are available through the RJJT website. This event will be held at the Mary Louise Mello Auditorium inside the Community Recreation Center at 969 Kiely Boulevard in Santa Clara.

Casting Call
RJJT will be holding auditions for its fall youth production of Charlotte’s Web, The Musical on September 4 and 5 at 3:30 p.m. Children ages eight to 18 are welcome to try out for the play. Callbacks will be on September 6 and rehearsals begin September 11. For additional information call Kevin Cornelius at (408) 615-3161.

Destination: Home and Housing 1000 Use Social Media and Crowd Funding to Help the Homeless

Community
Author Carolyn SchukPosted on March 11, 2015
In 2011, Soroptimist International Santa Clara Silicon Valley put on their first–ever Old Bag Luncheon and Auction. It was such a hit they’ve been...
SPONSORED