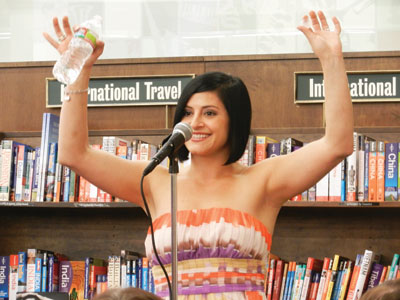 During the 1996 Olympic games in Atlanta, United States Gymnastics had its defining moment – the “Magnificent Seven” won the country‘s first-ever team gold medal. Among the seven gymnasts was 14-year-old Dominique Moceanu. As the youngest of the group, Moceanu, under the watchful eyes of her demanding father and tyrannical coach, held her own with the best of the best, but was secretly battling demons.

In her new book, Off Balance: A Memoir, Moceanu lays out her troubles surrounding the momentous occasion and discusses how being belittled by coaches Bela and Marta Karolyi and her Old World Romanian father took a toll on her both physically and emotionally. Moceanu holds nothing back as she exposes the dark side of gymnastics, reveals the trauma she carried from years of abuse, and opens the book with a chapter about the day her life changed forever.

When Moceanu was nine months pregnant and preparing to graduate from college, she received a letter from Jennifer Bricker. Unbeknown to Moceanu, her parents conceived a child when she was six years old, but because of the baby‘s health issues (Bricker was born without legs), the Moceanus were unable to afford the ongoing medical expenses and gave their child up for adoption. Throughout the book, Moceanu writes about the shock of the discovery and the joy of reconnecting with her long-lost sister.

As part of her book tour, Moceanu answered questions and signed books at the Stevens Creek Barnes & Noble in San Jose on June 28.

“For many years I was in fear and shamed by the way I was made to feel by the Karolyis,” says Moceanu of her reasoning for writing the book now. “It took seven years to process it. So it took a long time just to find the confidence to be able to talk about these things openly because when you write a book you have to talk about it and I couldn‘t talk about these things. They were very deep within me and I kept them quiet for many years. I didn‘t tell people about the way I felt, I just dealt with it, but having my husband (surgeon Mike Canales) be such a great individual in my life whose helped me find my voice, it‘s been so liberating and empowering to share my story now because it took so long to finally get it out.”

Canales, who Moceanu met in the gymnastics circuit, but didn‘t develop a relationship with her until 2001, quickly became Moceanu‘s “knight in shining armor.” “He came at a time when I really needed him so it was great that he was one of the few people who didn‘t want something from me, but just loved me for who I was,” says Moceanu. “He helped me get through so many emotions and so many things I was going through with the sport and how I felt about it.”

Some critics have claimed Off Balance is unorganized. Moceanu opens with the Bricker revelation, backtracks to her childhood, and switches between past and present throughout, but Moceanu carefully planned the book‘s layout.

“The chapters were already outlined [when I found out about Bricker] and I had to go back and figure out how I was going to start this again and do it right,” says Moceanu. “I wanted to start the first chapter with her…and I wanted to intersperse her life throughout because you have to get to know who she is and how I felt about her …I felt the readers would find it fascinating…It‘s also kind of like the paradoxical [story] of this girl born without legs who had this blissful life, and this gymnast who seemingly had everything. My life seemed to be perfect but I was unhappy inside so it was showing those parallel lives throughout.”

For additional information on Off Balance visit http://books.simonandschuster.com/Off-Balance/Dominique-Moceanu/9781451608656.

Daughters of the Golden West Award

Community
Author Melissa McKenziePosted on May 13, 2015
Saved just under the wire, a year-and-a-half year old dog, Ruby, was rescued on May 3. The American Bulldog had suffered quite a bit...
SPONSORED