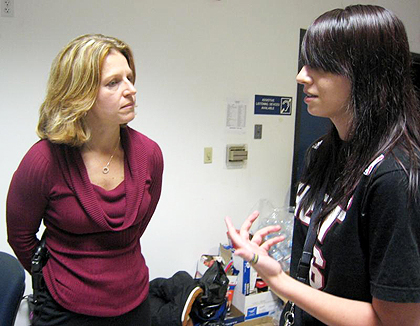 The girls participating in the GAINS (Girls Achieving in Non-traditional Subjects) Success Camp during the February break received a visit from Detective Kendra Nunes and Detective John Rickert from the San Jose Police Department. Detective Nunes, who specializes in cases involving child exploitation and Internet crimes against children, shared a cyberbullying case.

On the overhead screen, Detective Nunes displayed a picture of a topless 12 year-old girl and two boys, their faces blotted out. In the picture, the boys were touching the girl’s breasts. When the girl got to high school, this picture circulated online among the student body. After the girl transferred to a new school, the picture circulated among her new classmates. As the girl experienced continuing peer harassment, her parents notified Detective Nunes, who cited a boy associated with the picture for distributing child pornography.

Cyberbullying is an act of bullying, defaming, or humiliating someone using the electronic and communication technologies so widely available today. Cyberbullying should be reported to the police when it involves threats of violence, sexual exploitation, child pornography, extortion, obscene or harassing calls or text messages, stalking or hate crimes, or an image taken of someone in a place where she would expect privacy.

“Be careful of what you upload online,” Detective Nunes warns. “I’ve had cases where girls get pictures taken where they are [engaged in sexual acts] or doing drugs. The picture [is made public by a cyberbully] and then it hurts the girls when they try to apply for colleges or look for jobs years later.”

“If cyberbullying affects you, makes you feel like not going to school, the schools can do something too,” Detective Nunes continues.

Assembly Bill 86 2008, which took effect on January 1, 2009, is one of the first pieces of legislation nationwide to recognize the threat of cyberbullying among youth. This bill gives school employees the authority to address cyberbullying.

“Cyberbullying is prevalent and happens all the time,” says Detective Rickert. “As the younger age group becomes more proficient on the Internet, cyberbullying is a natural result.”

According to statistics Detective Nunes shared from the Cyberbullying Research Center, girls are cyberbullied more often than boys. Offenders are usually from the victim’s school, ex-boyfriends or girlfriends, and “friends” or former friends.

Ann Brownell’s daughter, Amanda, was the victim of vicious bullying and cyberbullying by two former friends. In an emotional presentation, Brownell revealed that in the month 16 year-old Amanda attempted suicide in the bathroom of her San Jose high school, she had received 3,500 harassing text messages on top of the cyberbullying she endured on MySpace, Facebook, and AIM. Today, Amanda is brain-damaged from the trauma left by her suicide attempt and requires around-the-clock nursing care. Acknowledging that not all anti-bullying programs in schools are effective, Brownell urged audience members to be vigilant about bullying.

“I wear my purple scarf to promote peace and change, and to support the [memory of] the kids who committed suicide last September,” Brownell says, referring to a number of bullied gay youth who had tragically taken their lives last fall.

What Ashley Garnica, a former student at Prospect High School, learned from this workshop is that victims of cyberbullying are not powerless.

“Two years ago, I was getting death threats online,” Garnica says. “I didn’t do anything then. Now I just learned IP addresses can be traced.”

Join TheAmandaNetwork-abc@GoogleGroup.com or email caringforamanda@gmail.com to learn more about “The Amanda Network,” the anti-bullying campaign established under Amanda Brownell’s name.