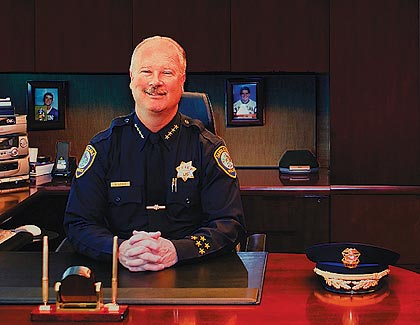 Steve Lodge, as most people know him, has always been very approachable, which many people say is the reason he succeeded so well as Police Chief. He was able to put a face on the police force that was very approachable and was always willing to listen to whatever people had to say. For someone that was in the public as much as Lodge, his friendly and upbeat attitude was always appreciated.

When asked about Lodge, City Manager, Jennifer Sparacino, responded, “Steve’s standard of integrity is one of his greatest contributions to the Police Department, to the Executive Management Team, to City employees and the entire Santa Clara community. Throughout his tenure as Police Chief, Steve has been an integral part of the City Management Team. He really understood and put into action the belief that if all City departments work together as a team, overall services to Santa Clarans will be exceptional.”

“I am very grateful for the partnership he has maintained with the Santa Clara Unified School District (SCUSD) over the years, working with the district to help our students have their first experiences with the Police Department be positive ones through programs like DARE and Every Fifteen Minutes, and helping our schools deal with other issues through the effective use of school resource officers,” said former School Board Member, Teresa O’Neill. “It’s usually a good reason when the SCPD is on SCUSD campuses. I also respect his personal involvement in a range of Santa Clara organizations, including serving with me on the board of the Santa Clara Schools Foundation, where he currently serves as president. The board is grateful that Steve is remaining on the board after his retirement from SCPD.”

Former City Council Member Aldyth Parle stated, “Steve was probably one of the most trusted men we have in Police Department. His sense of integrity and understanding of relationships is profound. His greatest success was in how he related to other people. He’s always been very sincere and has always shown great understanding. He’s always been able to understand what is said to him and his responses are very appropriate.

Not to be outdone, Mayor Jamie Matthews opined “Chief Lodge is one of the finest people to ever grace public service. His ten years of service as our Police Chief has been marked by the overwhelming support of the community, the Council and the men and women he has lead. To become a Police Chief is a great accomplishment, but to be the only elected Chief in the State of California and to have earned the confidence of those you serve by being elected three times is truly amazing. Steve and his family are a part of the very fabric of Santa Clara and all those who know them consider them close friends. He has served Santa Clara well and left the Police Department in great shape for the future. I know Steve will continue to be very involved in our community and hope that I get a chance to go fishing with him now that he is retired.”

Detectives Speak to Girls about Cyberbullying