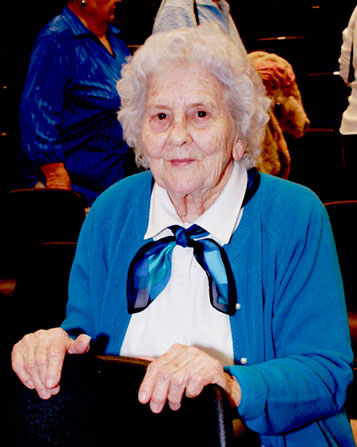 Few in Santa Clara haven’t been touched by the enormous legacy of the late Cleo Stuckrath. So her death on Dec. 27, 2013, following a decline of several years, was a loss for the entire community.

She was so well-known that when you mentioned “Cleo,” everybody knew who you were talking about.

She founded Santa Clara Showtime – now in its 32nd year – to fund senior health services. She taught dance and music, and led the Senior Band at the Senior Center. And, perhaps where most people first read her name, she wrote a weekly newspaper column that appeared in several Santa Clara newspapers, Cleo’s Corner, that highlighted the doings of people, service clubs, and community groups around the city.

Over the more than half a century she lived in the city, she received many community awards, including one of Mission City Community’s Fund’s first Austen Warburten Awards, the Neil Henry Volunteer Recognition Award, and the California Parks and Recreation Community Service Award. She also served five terms on the city’s Senior Commission. In fact, she was so beloved in Santa Clara that May 12, 1979 was designated “Cleo Stuckrath Day.”

During her years as a journalist, she rubbed shoulders with many of the biggest names in California politics including George Deukmejian, Norm Mineta, and Jerry Brown. She even had a tour of Hearst Castle given by William Randolph Hearst himself.

But it wasn’t contact with the famous and powerful that drove Cleo. It was her passion for ordinary people, and her belief that everyone has a story worth telling and talent that deserves recognition.

She found her best stories right here at home – a lady bullfighter who was a church organist on Sundays; a Santa Clara University Student who won a scholarship to train with renowned clown Johann Ludwig Jacob (credited with popularizing the clown car, and the originator of the red rubber ball nose); an aging film star from the silent movie days.

Perhaps her greatest gift was helping people exceed their expectations of themselves. People can do a lot more than they think they can, she used to say. And in her classes and Showtime, she showed them just how much they could do. “What I enjoy more than anything else is getting people up and doing things,” she said in a 2005 interview.

Born in Holstein, Iowa, Cleo and her family came to California as part of the great migration during WWII to work in the wartime industries. She and her parents worked in the Richmond Naval Shipyard and later at San Francisco’s Hunter’s Point Naval Shipyard.

Her first brush with journalism came in high school, when a local department store held a copywriting contest. Cleo wrote an ad for a dress, “and they thought it was wonderful. They put it in the paper,” she recalled.

When Ed was stationed at the Great Lakes Naval Training Station, she started covering navy base news for the Waukegan News Sun. Later, she did the same for the Harper Gate in Richmond.

But after moving to Santa Clara, four growing children and their activities kept her busy. Writing didn’t come back into the picture until her children grew up and left home. “I got terrified, that cold thing in your gut,” is how she put it. So she started looking for opportunities to get involved.

“I saw an ad, and they paid five dollars writing neighborhood news. I knew a few people, and then I just started going a few places, and they gave me a good buildup,” she said. “They let me write two or three big pages, anything I wanted to write. It was all new to me. They liked it and I liked it and so I wrote more.”

The secret of her success was simple, she said. “Go everywhere you’re invited, and put everyone’s name in the paper.” And go she did – to parties, fashion shows, political fundraisers, community dinners. “There used to be a party every five minutes,” she recalled.

But that simple answer contained a world of wisdom about how one ordinary person can have such an impact on the community. First, find a need and be the person who fills it. And second, generously recognize everyone who helped. Her view was that you can’t help but succeed when you’re starting from zero, because every achievement is a 100 percent improvement.

Santa Clara’s annual Showtime got its start when 1979’s Prop 13 cut money for senior health services. Cleo’s response was characteristic: put on a fundraiser to replace the lost money. Because she had recently written and produced a melodrama that successfully raised money for the Knight Raider Drum and Bugle Corps, she decided to do the same thing for the health services.

For many years, she was Showtime’s producer, author, director, costumer, set designer, and stage manager. She wrote – on her 1970s IBM Selectric typewriter – and directed her last Showtime melodrama in 2007.

When she realized that she needed an entity to manage the money, Cleo formed another organization, The Santa Clara Women’s League, which continues to sponsor the event, as well as organizing the raffle, silent auction and food sales that accompany Showtime. And all of the proceeds continue to be donated to fund senior health services.

In retrospect, it’s easy to acknowledge accomplishment. But at the time, Cleo’s endeavors took considerable boldness. Plus, it took willingness to not always be perfect, but to recognize that good-enough (there were plenty of typos in her scripts) is all any of us need to change our world for the better. “My husband always said I was single-minded, that if I was going to so something, I’d do it,” she said 2005. “God’s given me some gifts. You just have to have guts.”

A Celebration of Life for Cleo will be held on Saturday, Jan 25, 1 p.m. at Resurrection Lutheran Church, 2495 Cabrillo Ave., Santa Clara.

In lieu of flowers, donations can be made to the Santa Clara Women’s League, P.O. Box 3033, Santa Clara, CA 95055, for support of the City of Santa Clara Senior Center Health and Wellness nursing services program.