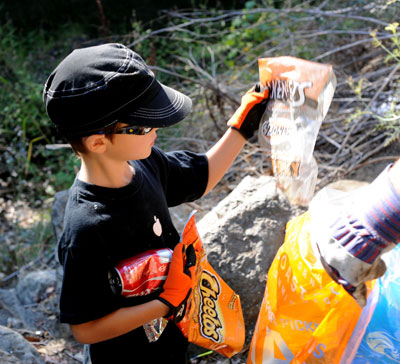 Saturday morning, 20 people from different cities and backgrounds gathered across from Santa Clara’s Maywood Park on Pruneridge Avenue to participate in a much-needed task. However when they finished, virtually no one was able to see any signs they were even there or the results of their efforts. But while their work was mostly unseen, the results of their efforts were anything but. In a short three hours, approximately 300 pounds of trash and 30 pounds of recycling were collected and removed from Saratoga Creek, from Pruneridge Avenue to Homestead Road.

Volunteer Site Coordinator, Natasha Drisdelle, described the importance of the work, “Although it might seem trivial to clean an area that no one really sees, 80% of the trash in our oceans comes from inland creeks and rivers that feed into the coastland. In fact, due to a spike in inland volunteers like us, Santa Cruz is now picking up 1/3 of the trash it did 10 years ago.”

The efforts of Drisdelle and the volunteers working with her on Saratoga Creek were part of an overall larger project called Coastal Cleanup Day. This year was the 27th annual Cleanup Day. According to the California Coastal Commission, Coastal Cleanup Day (CCD) is the first event of COASTWEEKS, “…an annual three-week celebration of our coastal and water resources that takes place throughout the country.” CCD is “the kick off for the celebration…when 80,000 Californians come together to keep our coasts and inland waterways free of debris. Beach, inland waterway, and community cleanups took place up and down the California coast, from Mexico to the Oregon border, around San Francisco Bay, and at sites as far inland as Lake Tahoe and the Salton Sea.”

But the California Coastal Commission isn’t the main group behind the Cleanup Day. Because pollution along the coast and inland waterways is more than just a “California problem”, CCD is “…part of the International Coastal Cleanup organized by Ocean Conservancy.” According to the Ocean Conservancy’s website, the “…Ocean Conservancy is an environmental nonprofit advocacy organization that promotes healthy and diverse ocean ecosystems and opposes practices that threaten ocean life and human life.”

In Santa Clara County alone, 42 separate cleanup events were held in cities ranging from Palo Alto and Alviso in the north to Morgan Hill and Gilroy in the south. The City of Santa Clara saw the efforts of volunteers at five sites, working to help clean Saratoga Creek, San Tomas Aquino Creek and Calabazas Creek. Saratoga Creek alone had three separate efforts that worked to remove trash and debris from Pruneridge Avenue to Homestead Road, Kiely Boulevard to Benton Street, and El Camino Real to Bowers.

The three-hour effort was definitely successful. Eben Schwartz, Outreach Manager, California Coastal Commission stated, “With 80% of the cleanup sites reporting, the statewide count stands at 62,963 volunteers. Those volunteers picked up 523,201 pounds of trash and an additional 68,543 pounds of recyclable materials, for a total of 591,743 pounds.”

For more information on COASTWEEKS, or next year’s Coastal Cleanup Day, visit www.coastal.ca.gov.

Saratoga Creek between Pruneridge Avenue and Homestead Road was one of five sites that benefited from the efforts of volunteers. Part of the process is to record the items removed, which can make for an interesting list.

According to volunteer Site Coordinator, Natasha Drisdelle, “Among the items removed…the most common item we found were snack wrappers – without contest! In fact, we cleaned up almost 1,000 pieces of snack wrappers. Individually wrapped single portions of snacks.”

We assume that this is from the nearby school and soccer fields. Because there is only a chain link fence, the wrappers can easily blow across the field, through the fence and into the creek.”

When asked about the most unusual items, Drisdelle replied, “A stuffed bunny rabbit. A five-quart jug of vinegar. Scrap building supplies and dumped metal. Two infant car seats that were also dumped in the creek.”