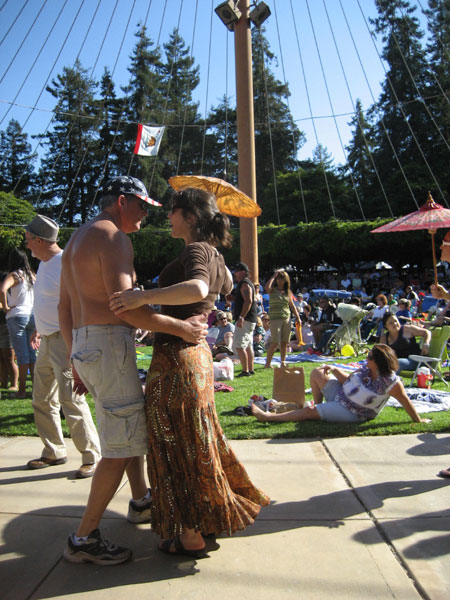 If you were one of the Santa Clara Art & Wine Festival goers grumbling Sunday because you didn’t get a 31st festival keepsake wine glass for your collection, you weren’t alone. By early Sunday afternoon, all 6,500 of the 2011 wine and beer glasses had sold out. A couple hours later, vintage glasses from as far back as the 80s had been hauled from storage, and they, too, sold out. Late comers had to settle for free plastic tumblers.

Sixty thousand people attended the September 17 and 18 Art and Wine festival held in Central Park, according to City Parks and Recreation director Jim Teixeira, basing the estimate on beer and wine sales and cars in the parking lots. The crowd topped the 2010 attendance by ten thousand.

“This makes up for the 4th of July. Nobody came without fireworks. It was sad. But today, you can feel the sense of community,” says Jessica Mead, who lives across the street from the park and attended with family and neighbors.

“I love the art and wine festival,” says Monica Esteban from Santa Cruz, pushing her seven-month-old son, Jayden, in a stroller. “My family comes every year. It’s a 26-year tradition for me because I’m 27. My grandpa—Wharner Nash—is a retired Santa Clara fire fighter, and my grandparents still live here.”

Three festival stages had ongoing entertainment, but the pavilion stage was the busiest with crowds listening to live music and dancing in the sun. The smart ones held parasols for shade even as they danced.

“We loved the music and saw a lot,” says Susan Martin. There was plenty to see beyond the stages with a Kids Kingdom with expanded activities, thirty non-profit Santa Clara groups raising funds by selling food along Food Alley, and 175 artists’ booths.

Antony Ajan tried out a flute handmade by Jose Cabezas (www.ancientwinds.com) of African Bubinga wood. Robert Benscoter (www.spokebusterforaids.org), who rides his bike to fight aids and other diseases, had to walk it through the crowd. Vendor Diane Talley, who makes purses out of old records and album covers (www.musicpurse.com), rated the festival as pretty good for sales despite the economy.

“I think we’ve already gone that way. Are we going this way?” says somebody’s lost husband.

Five nonprofits will benefit from net proceeds of the festival, which was $45,000 in 2010. The Santa Clara Schools Foundation, Police Activities League, and Friends of Parks & Recreation received $13,000 each. Wilcox and Santa Clara High Schools Grad Night committees received $3,000 each. These same organizations will benefit in 2011.

“The schools foundation provides many extra things for the students and classrooms, things we wouldn’t be able to purchase otherwise,” says Santa Clara Unified School District Superintendent Bobbie Plough, volunteering at a wine booth. “There’s great collaboration between the entire staff and community.”

Santa Clarans can thank 24 business sponsors for helping to fund the festival, including platinum sponsor Kaiser Permanente. They can also thank the city. Unlike most cities, which use professional developers, Santa Clara’s art and wine festival is organized and implemented by the Parks and Recreation Department.

“It was a great festival. Great wine. A great time,” says Barrera as she and her two friends head home at the festival’s close Sunday, wine glasses in hand.