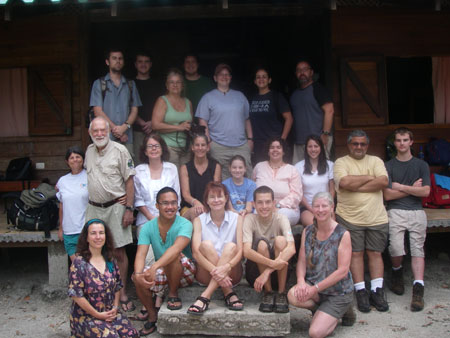 “Being in the rainforest has the effect of changing someone forever,” says Jean Replicon, a biology instructor at Mission College. In the Tropical Ecology class that Replicon co-teaches with Elizabeth Bell, students attend class for two Tuesday evenings a month in the fall semester, and then go on a hands-on field trip to Costa Rica in January during break.

“It’s a rare class because it gives individuals a chance to do research and it’s wonderful to have that opportunity to see if they like carrying out a project and working as a team,” Replicon says.

According to Replicon, the Tropical Ecology class spotlights both plants and animals. Years ago, Replicon took up an opportunity for teachers to explore the field stations in Costa Rica. When she arrived there, Replicon saw the opportunity to study hands-on the lushness and beauty of Costa Rica. She knew she had to bring this learning experience to Mission College students.

“One thing I really enjoyed was the Sky Walk in Monteverde-it’s a series of suspension bridges that lead through the canopy of the rain forest,” Replicon says. “On the Sky Walk, I could see orchids, butterflies, and birds. And it’s like taking a walk in the clouds in a cloud forest. The snorkeling in Costa Rica is also wonderful. I snorkeled in a lagoon in Cabo Blanco that has been preserved for 40 so years. There we see lobsters of enormous size, sea turtles, conches, and fish of enormous variety.”

These are just two of the many activities students in Replicon’s Tropical Ecology class get to participate in while they’re studying in Costa Rica. Replicon emphasizes that her students are not merely sightseeing in Costa Rica, but that they are carrying out research projects as well.

“This semester, we will be investigating the distribution of epiphytes, or plants that grow on other plants,” Replicon says. “We do this by looking at different trees and recording the different plants growing on them. We’ll compare the different types we see at different field sites. The other project has to do with leafcutter ants. We’ll be studying the ants’ behavior and examining their efficiency and path reconstruction.”

Replicon’s former students have only positive things to say about studying in Costa Rica and being in the Tropical Ecology class. For example, on the class web site at web.mac.com/replicon/MC/home/home.html, a former student named Brenda likened herself to a sponge soaking up knowledge while she was on the trip. She also added that at mealtime in Costa Rica, the students gathered around a table to divulge what they’d seen, and how the delicious food would be gone before her classmates finished sharing.

“The rainforests aren’t going to be around forever,” Replicon says. “That’s the sad part of it. So [being in this class] is an opportunity to see an ecosystem on decline.”

Replicon says that though the class has already begun, there are still spots available for interested learners. At this time, late adds to the class will be accepted. For more information about adding the class, contact Replicon at 408-855-5267 or email her areplicon@coastside.net.

Back in Time at the Harris-Lass House Museum Movie Night