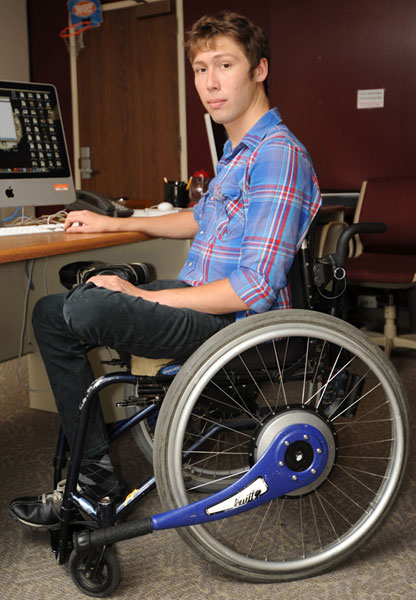 Matt Rupel turns 21 in October. Nine years ago he was diagnosed with Friedreich’s Ataxia (FA): a genetic disease that would eventually put him in a wheelchair and threaten his heart.

Certainly there have been happy times, such as trips to Europe, a reign as homecoming king, and his current stint as editor in chief of Santa Clara University’s newspaper.

But dark times persist, most notably major back surgery and his transition to a wheelchair. Living with a debilitating disease can be formidable. “It’s not any one thing,” says Rupel. “It’s not using the elevator or needing ramps, or falling out of the wheelchair, or falling out of bed that’s tough. It’s that they happen over and over again….”

At twenty-one, Rupel has the maturity to take charge of his own treatment. He has renewed commitment to an extensive drug and vitamin regimen, daily balance exercises, and research about possible treatments. “I’m screwed either way,” he says with a grin, “so I might as well throw everything I can into it.”

Friedreich’s Ataxia Research Alliance (FARA), the non-profit devoted to slowing, stopping and reversing this disease is on a mission to put itself out of business. Unfortunately everything takes time—finding promising drugs and treatments, funding numerous clinical trials, gaining FDA approvals. And once a cure is found, people with FA will need help reversing the damage that has already occurred. It’s also important that someday FA become part of newborn screening so that the eventual treatments begin well before a child has symptoms.

Another leap forward is the recent development of induced Pluripotent Stem Cells (iPS cells). These stem cells, (from a patient’s skin), are grown in the lab and can be used as a system for testing classes of drugs and even eventually for treating patients.

In addition, FARA funds research on genetic-based therapies to eventually stop FA. Promising drugs that target the root-cause genetic mutation of the disease await FDA approval to go into clinical trials. FARA anticipates significant genetic-based breakthroughs in the next two to five years.

Though much of FARA’s funding comes from individuals directly affected by the disease (such as the Friedreich’s Ataxia In The Heart event in honor of Matt Rupel on October 8th in Santa Clara), it also relies on grants by the National Institute of Health and other large institutions. Grants are shrinking in number and size due to the economic downturn. Losing funding for FA research has surprisingly broad ramifications. Compared to more common genetic diseases such as Alzheimer’s, FA is quite simple. It has one gene with the same common mutation. What we learn about FA carries over to other much-harder-to-solve diseases.

The frustration for Rupel and his fellow FAers is that the clock is ticking. This year was a hard one—the FA community lost several valiant young people to the disease’s relentless progression.

Rupel’s dreams are simple: graduation, a job in journalism, and the freedom to enjoy a variety of pursuits without being hindered by a debilitating disease. “Is it too much to want everything?” he asks wryly.

Looking out five years, he’s hoping that things on the FA front will have started to improve. It takes a lot of perseverance to keep putting in so much effort with a weakening body. That doesn’t mean he will ever stop trying. It’s obvious to anyone who meets Rupel that he’s a man on a mission.

So here’s to you, Matt Rupel. Happy 21st Birthday! Blow out your candles and make a wish. We’ll be wishing with you.

To help find a cure for Matt Rupel and other young men and woman with Friedreich’s ataxia, please visit the FARA website: www.curefa.org. You can also attend the upcoming Friedreich’s Ataxia in the Heart (FAITH) event in Santa Clara—for more information, visit www.fa-ith.org or e-mail FAITH.Rupel@gmail.com.

Kristi Wright is the author of the futuristic series for middle-grade children: The Basker Twins in the 31st Century. 75% of the profits from the first book in the series go toward FA research. You can e-mail her at author@kristiwrightbooks.com. Her website is www.baskertwins.com.

Community
Author Alissa SorotenPosted on June 20, 2018
Now that students are on summer break, it’s time to fill the free days with more than video games and flocking to the air-conditioned...

Community
Author Melissa McKenziePosted on December 14, 2011
“Um…excuse me. Do we have to give all of these back?,” asked Jordan, 6, of Kathryn Hughes Elementary School. “No, everything in that bag...
SPONSORED