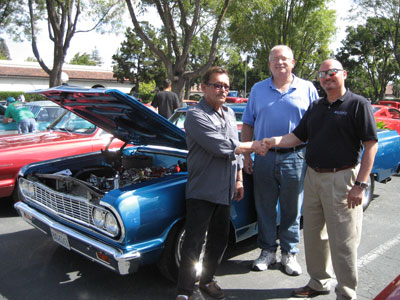 Peabody collects Corvettes and pointed out special features of the 1968 (the first year for a chrome T-top) bronze Corvette he found on e-Bay three years ago. “Everything but the front carpet is original,” he says.

Admission to the show was also unique—a contribution of classroom supplies such as notebooks, paper, and calculators for schools. By the show’s end, fifteen, thirty-seven show’s end, 37 fifteen gallon bins had been filled. Supplies can still be dropped off at KeyPoint headquarters through the end of the week.

Juan restored the El Camino from the ground up over a three-year period. He did all the body work and designed its turquoise color, a combination of six colors that looks different in different lights.

“We come to the show for the kids. It’s the community working for the community,” says Juan, a Santa Clara resident who moved his business—AJ’s Auto Repair, Service & Performance, 1819 El Camino Real—to Santa Clara a year ago.

“You rotate the tires and align your car. Why not your body?” says Yuen.

“It’s a nice event for a good cause. And it’s a chance to get together with a lot of good friends,” says Tom D’Amico of Santa Clara, attending the show with club friends from Rod & Wheelers of San Jose.

“The show makes people happy when things are going up and down in the economy. For a few hours people can come in and forget about the economy and have a great time and just enjoy the day,” says Doron Noyman, KeyPoint Director of Sales and Development.