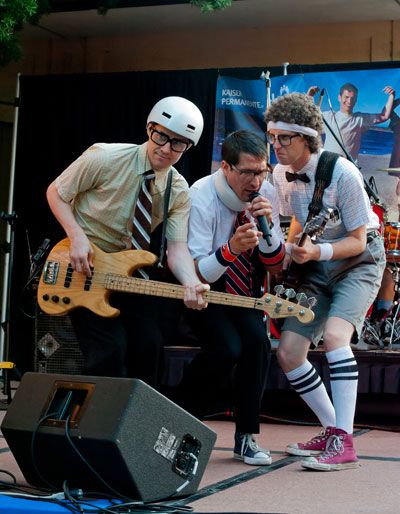 The second annual Celebrate Santa Clara came to Franklin Mall on Friday, July 13. Presented by the Santa Clara Chamber of Commerce & Convention-Visitors Bureau and Kaiser Permanente, the location of the venue, food, wine and beer booths and bands to dance the night away to made it easy to confuse this event with the Annual Santa Clara Street Dance, but they’re really two different events. Both feature music, beer, wine and food, as well as local restaurants and, of course, bands that make people want to get up and dance.

Most of the attendees didn’t seem to notice the difference. “I love the street dance. My friends and I have been coming for years,” reported Santa Clara resident Sara Stevens, “I just hope the band shows up.” It’s rare that an event is held without any gaffes and CSB was no exception. There was a large time gap after the first act finished and before The Spazmatics took the stage that had some questioning whether the night was going to end early. “This makes no sense. I’d swear I heard a band playing about 35 minutes ago, but since then, it’s been like a big sales pitch for the vendors and some law firm. If it wasn’t for the beer and wine, I’d be out of here,” said Robert Lawrence. “I heard about this from friends, but when I looked at Google Maps, it showed Franklin Mall as being on Bryant Street in San Francisco. Plus, there were some websites that showed it was at Santa Clara University.

“It makes sense this mall is so quiet, its location is a well-kept secret,” added John Smith. “Maybe it’s the curse of Friday the 13th that the band didn’t show up,” questioned Megan Krawitz.

Even with the time gap, it seemed like the crowd was there for a good time and once The Spazmatics took to the stage, the audience was rewarded for waiting out the time gap. “Heck Yeah! This is what I’m talking about!” exclaimed Lawrence as the band got the crowd on their feet.

The Spazmatics were definitely the highlight of the night. This was their first appearance in Santa Clara and many expressed their delight and desire to see the band again. “This is great! A friend told me about them and they’re even better in person. I love their outfits,” exclaimed Heather Jones. “In the 80s, I was a complete nerd, or a spaz, and I’m sure I had some outfits like that too. I think the drummer is wearing one of my sweaters! I didn’t own a pocket protector, but it’s good to see Spaz’ get some respect,” added Bob Jones, Heather’s husband. As couples sat on the lawn around the stage or danced to the music, it was obvious The Spazmatics are a great band to watch and enjoy. For more information on The Spazmatics, please visit their website, www.facebook.com/spazmaticsrock.

Gulliver Travels to the Mission City