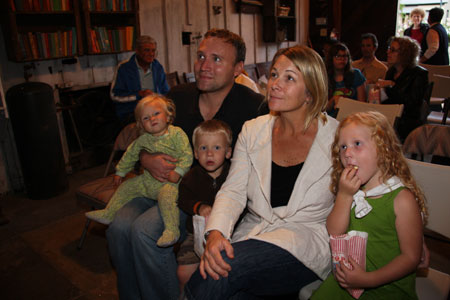 It was Friday night at the movies with popcorn and hot apple cider at the Harris-Lass Museum House barn. The free family treat September 16 took Santa Clarans as far back in time as 1865, the year the Civil War ended and the year the Italianate style Harris-Lass house at 1889 Market Street was built in Santa Clara.

The half-hour documentary “The Harvest—The Story of the Harris-Lass House” capped a year-long 20th anniversary celebration of the house as a volunteer-run museum, which opened its doors in February 1991 thanks to collaboration between the city of Santa Clara and the Historic Preservation Society of Santa Clara (HPSSC).

The three movie showings, presented by the HPSSC, drew about 50 adults and children.

“I like watching the history of this place. There’s a lot people don’t realize is here,” says Martinez.

“Mom wanted to come because of me. I just love history. I was always the third grade pig, running for the history books,” says Max Silva, now a fifth grader.

“We had a great time. I wanted my three boys to finally get to see the place because we drive by it every day, and they’re really into history stuff,” says Maria Silva.

The 2010 documentary, video-taped on location by Cupertino Senior TV Productions for the public access television series “The Better Part,” starts with an introduction to Santa Clara Valley’s agricultural past. It gives background on the Harris and Lass families, who lived in the house between 1865 and 1987, when the house was sold to the City.

A typical day in the life of the Lass family is re-enacted by museum docents and actors from the Santa Clara Players and the Roberta Jones Junior Theater. The documentary ends with contemporary scenes from the annual museum tea and fashion show and a house visit by a Santa Clara third grade class.

Family-life scenes from the documentary stood out for seven-year-old twins Kyle and Ethan Silva.

“They inspected the kids’ hands before dinner,” says Kyle.

“The piano the girls played was interesting,” says Ethan.

“We came to get a glimpse of Santa Clara history with the kids. I was born and raised in Santa Clara and never visited even though I’ve gone by a zillion times,” says Liz Sedic. Sedic, Paule, her husband, and their three children ages ten months to almost five, had front row seats. “It’s a cozy fall evening with the family,” she says.

If you missed the documentary, not to fret. It is also shown at the beginning of house tours. The last scheduled house tours before the museum and gardens close for the winter are September 25, October 8, and October 22, noon to 3:30 p.m. The HPSSC Historic Homes tour is December 2 and 3.