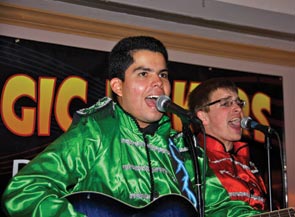 “Bernard experienced bullying, especially during his middle school years,” recalls Donna, the mother of Bernard, who is autistic. “Kids would say things, and it would upset him. Some kids would push him out of the lunch line or take his lunch money.”

Not only is bullying and social exclusion a painful experience for a child, it is also troubling for the bullied child’s parents to know their child is being mistreated. Because Bernard’s autism affects his ability to communicate, it was challenging for him to identify the kids who were picking on him. Although Bernard’s experience with bullying happened many years ago, Donna still remembers this frustrating period of time.

“The only recourse I had then was to go to the school and watch what was happening during lunch,” Donna says.

Fortunately, Bernard had a much better experience in high school, where he comfortably took a variety of courses, such as music, with the rest of the student body outside of his special education classroom.

Today Bernard is 25-years-old. Donna’s two daughters are 19 and 23-years-old. While Donna acknowledges that raising and caring for an autistic child can be challenging, this determined mother is committed to helping all her children reach their fullest potential.

Three years ago, Donna decided she wanted to create a positive and inclusive environment for Bernard to showcase his musical talents. So she reached out to other mothers with autistic children and they formed a band called Magic Makers. This band allows special needs individuals to perform music and meet for rehearsals at Buchser Middle School. David Ladd Anderson, a music teacher at the school, agreed to be the band director.

The Magic Makers band can perform many popular songs with outstanding professional ease, including The Beatles’ “I Want to Hold Your Hand,” Lionel Ritchie’s “Hello,” and The Monkee’s “Daydream Believer.”

“At Magic Makers, Bernard plays the electric base and he’s one of the lead vocalists,” Donna says. “Bernard is also in other bands, local mainstream bands.”

Not only has Magic Makers enriched Bernard’s life, it has also benefited many other people as well. One such individual is Katie, a 30-year-old woman with autism and epilepsy. She has been a vocalist in the chorus for the last two years.

“It was terrible for Katie in high school,” says Vera, Katie’s mother. “People picked on her. She had a little network of friends who were also special needs. But not all her peers communicated well.”

“In the two years she has been involved with Magic Makers, Katie has made many friends,” Vera continues. “Katie is in the middle of moving down to Santa Clara. She wants to move down here [from Burlingame] to be closer to her friends.”

Pleased with watching her son and others grow in Magic Makers, Donna dispenses advice to struggling parents of special needs children.

“Go with your instinct about what your child needs and what’s best for your child,” she says. “Pace yourself and be consistent and persevere. If there’s a downturn in behavior, there will be an upturn in the near future.”

Visit www.magicmakersband.com to get more information about Magic Makers and to watch band performances.