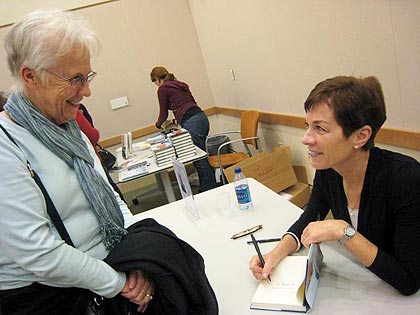 When Bo Caldwell’s mother suggested that she write a novel based on her grandparents’ experiences as missionaries in China, Caldwell initially brushed off the topic.

“I thought missionaries’ lives would be too dull and simplistic for fiction. Then I read a lot of missionary biographies and found their lives anything but dull and simplistic,” Caldwell says at a book talk held at the Santa Clara City Library on Jan. 24th.

Caldwell’s research involved studying her missionary grandfather’s memoir. She found its details about China fascinating, and she enjoyed reading about the love her grandparents shared. Going through her grandparents’ things, Caldwell found a story to tell.

While working on the manuscript for her novel, Caldwell learned she had breast cancer. Having to undergo treatments and recuperate, Caldwell put her book project on hold for a couple of years. When she felt ready to continue writing her novel, Caldwell realized she had gone through a spiritual transformation.

“I learned during my illness about surrender, about giving things up. Friends told me to be patient [with myself]. Later, when I came back to my novel, I realized I was nervous writing about faith because my faith had changed during my illness,” Caldwell says.

Letting her experiences and her grandparents’ experiences guide her writing, Caldwell completed her second novel, “City of Tranquil Light.” The fictional story takes place during the early 20th century and follows an American missionary couple living in China for about 25 years in a fictional city called Kuang P’ing Ch’eng, which translates into the “city of tranquil light.”

At her book talk, Caldwell treated her audience to excerpts of her new novel. One of the book excerpts she read aloud entailed a conversation between one of her missionary protagonists and a local bandit chief. The passage detailed the missionary’s compassion and spiritual testimony with the bandit chief, thereby illustrating the exchange of ideas between the missionaries and the Chinese during the early 1900s.

After her presentation, Caldwell opened the floor to questions from the audience. In her responses to audience members’ questions, Caldwell shared that she hadn’t visited China yet but would like to do so someday. She also revealed that her favorite books include “To Kill a Mockingbird,” “The Remains of the Day,” and “Great Expectations.” For aspiring writers, she recommended the books, “This Year You Write Your Novel” by Walter Mosley and “The Courage to Write” by Ralph Keyes.

Caldwell was born in Oklahoma City and grew up in Los Angeles. She attended Stanford University where she majored in English with a concentration in creative writing. After graduation, she continued to study creative writing under a two-year Wallace Stegner fellowship at the university. “The Distant Land of My Father,” Caldwell’s first novel, was a Silicon Valley Reads book selection in 2008.