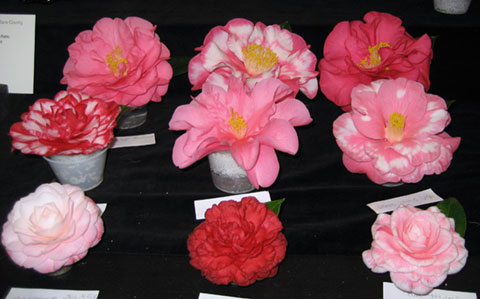 More than 2,000 camellia blossoms in every hue of white and pink—and even yellow—transformed the Santa Clara Community Recreation Center into a sea of blossoms February 23-24. It was the 72nd Annual Camellia Flower Show and Plant Sale, one of the premier camellia shows (out of eight) in northern California. The show is co-sponsored by the Camellia Society of Santa Clara County and, since the 1980s, the city of Santa Clara.

“It’s a great show. Because of the cold weather, there are fewer blossoms than typical, but the quality is spectacular,” says John Mendoza, III, society president and show co-chair with Bill Allman.

“It’s a very nice show. There are a lot of different camellias, so many varieties I never would have anticipated,” says first-time show attendee Jean Burkley from Santa Clara.

“I had no idea there were so many different varieties,” agrees Pam Stallings, Burkley’s companion. “I really was blown away by seeing a yellow camellia.”

Best of show and sweepstakes runner-up Donald Lesmeister from Carmichael and his wife, Joan, who celebrated their 49th wedding anniversary Saturday, have been growing camellias since the early 1970s when friends introduced them to the hobby.

“For Don, the camellias are our second set of kids,” says Joan Lesmeister. “They’re his passion. He does all the work, and I go along for lunch at the shows.”

“I talk to them. When I go home, I’m going to talk to that plant and tell it what a good job it did and that I’m so pleased,” says Donald Lesmeister. He has lot of sweet-talking to do with 276 camellia plants to tend.

“The society wants to promote the growing of camellias and educate people that they’re not hard to grow and give beautiful color in the middle of winter when everything else is dormant,” says Mendoza.

Of interesting historical note: when the Santa Clara County Camellia Society was founded in 1940, membership was restricted to men. Also of note: in the 1950s, society members pooled their money, raising about $1,000 to purchase and import a set of four specimens from Asia, where the camellia originated. The plants propagated from those specimens helped the society to thrive.

The Santa Clara County Camellia Society (www.SCCCamelliaSociety.com) meets the third Wednesday of each month September to May, 7 p.m., at the Historic Jamison Brown House, 1507 Warburton Avenue, Santa Clara (behind the Triton Museum of Art). Women have been welcome as members since the end of the 1940s.

Some of the top 42 trophy-winning camellias and their growers as determined by the 32 judges: