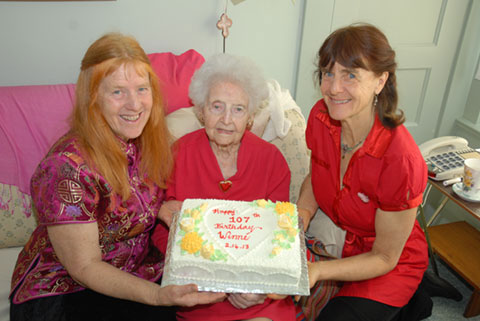 Winnie Hook has lived long and well. She has, in fact, lived for more than a century. The petite, white-haired woman, née Noreen Fern Bastian, celebrated her 107th birthday last week among family and friends in the cozy Santa Clara home where she has lived for almost 90 years.

The history of the 20th century and the dawn of the 21st century is Hook’s history. She was born at home in San Jose on Valentine’s Day in 1906, the year of the Great San Francisco Earthquake. She has survived great earthquakes, great wars, great depressions, and great scientific and technological changes once unimagined. She recalls when electricity replaced coal oil lamps, when her family got a four-party-line telephone, and when the automobile overtook the streetcar.

Hook still has a zest for living, waking each morning with anticipation for what the day may hold.

“Here I am, oh, Lord, to do your work,” she says upon arising and dressing around 8 a.m. “This is the day the Lord has made…,” she sings with granddaughters Ananda Dancingheart or Nancy Spice, who alternate months caring for her. She lived by herself until 2011 when she turned 105.

“My grandmother has a deep faith and really trusts in God,” says Spice. “She just keeps moving toward the light, the beam ahead of her.” A convert to Catholicism, Hook has worshipped in Santa Clara at St. Clare and St. Justin Catholic churches, but now attends weekly mass at the Carmelite Monastery.

Hook’s days include three healthful meals, morning and afternoon naps, phone conversations and visits from friends, occasional lunches out, and Saturday mornings navigating with her walker at the downtown farmers’ market, where she snacks on samosas. Bedtime is about 8:30 p.m.

Hook is legally blind, so her granddaughters help her order books on tape over the Internet. “The Bridge: the Life and Rise of Barack Obama,” is one of her recent selections.

“I admire my grandmother for her curiosity. She’s a life-long learner,” says Dancingheart. “She asks me questions all day. ‘Could you go look that up on the Internet for me?’ she says.”

“Just keep breathing,” Hook says when asked the key to long life. “And live by the Golden Rule.” You have to talk loudly into her one good ear because she doesn’t wear hearing aids. She sends out birthday cards to some 100 friends a year and is a long-time member of the Catala Club, a Santa Clara University service organization.

“I tell everybody, ‘Moderation in everything you do,'” continues Hook, who has never smoked.

“My husband did my share,” she says. She met Wilbur John Hook, her late husband, at his brother-in-law’s drugstore on the Alameda, where he was helping out. It was the summer that she was 17. She had completed high school and was working at Richmond-Chase—a San Jose canning company—scooping up fruit.

“The tips of my fingers began to wear out and hurt, so I went to the drugstore to buy finger stalls [to protect my fingers]. It was love at first sight,” Hook says. She and Wilbur married after courting just three months and had two children, daughters Esther Rechenmacher and Sharon Gissler (married to former Santa Clara mayor Bill Gissler). Hook’s descendents now number 75.

She and her husband, who retired from Agnews State Hospital after working 30 years as a painter and glazier, traveled widely, taking bus tours of the U.S. and visiting 48 countries. Before her eyesight dimmed, Hook’s hands were always busy—gardening, sewing clothes for her granddaughters, and making finely-detailed clothing for her beloved collection of dolls.

Hook’s parents, Louis and Vicey Fern Bastian, were of Irish, English, and German ancestry. Her mother died of tuberculosis when she was seven, and Hook lived in an orphanage for two years, until her father remarried. He died at 65, and her two younger brothers “died young.” After 60 years of marriage, her husband died in 1983 at 85.

“No matter what happens in her life, my grandmother will cheerfully, confidently move forward. If something happens that she has no control over, she won’t wallow in it,” says Spice. “She’ll say that we can pray for this situation and these people, but if there’s nothing else we can do, we need to let it go.”

Handbags and High Fashion at Soroptimists' 2