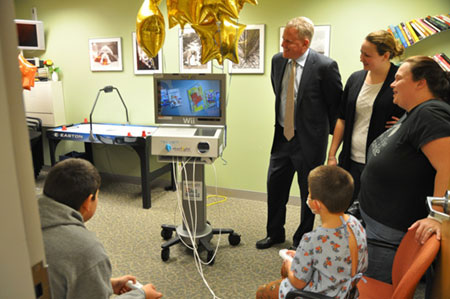 Eleven-year-old Richard Bess, of San Jose, a patient at Kaiser Permanente Santa Clara’s hospital, was helping Northwestern Mutual Insurance executive Tamara Radevic understand the finer points of playing a video game on the new Wii set. The woman in her business suit and the young patient in his hospital-casual sweatshirt were busily maneuvering their controllers to change the action on the screen.

“I’m just following him,” laughed Radevic, closely watching the screen and mimicking the moves of young Bess, who looked more like he really knew what he was doing. “This is fun but he’s GOOD!” she said, nodding at the youngster. Richard smiled slightly.

“It’s very mobile: we can wheel it to the patient’s bedside or if they’re up to it, they can come here to the teen lounge in Pediatrics to play,” said Wendy Fought, the childlife specialist who advocates for pediatric patients at the hospital.

Bess, and 6-year-old Mikel Tamura of Mountain View, another patient, helped unveil the Wii cart in an informal ceremony. A white sheet was draped over the machine and they both pulled the sheet off. A smattering of insurance company executives, parents, and hospital officials applauded briefly, and the two young patients immediately got busy with the game controllers. They didn’t seem to mind that there were no speeches.

“Being in a hospital is a challenge for young people,” said Dr. Susan Smarr, physician-in-chief at the Kaiser Permanente Santa Clara Medical Center. “This wonderful donation will make the time go a lot faster for these children.”

As he spoke, Bess had launched the Wii’s basketball game and was making his on-screen avatar sink multiple baskets just by doing a “tossing” motion of the controller. He was joined by Northwestern Mutual executive Chris Andrews who very quickly shed his business persona and became a street court challenger.

“How do I steal the ball?” Andrews shouted. Bess didn’t reply, but smiled a slight knowing smile and kept his eye on the Wii screen, sinking another basket.