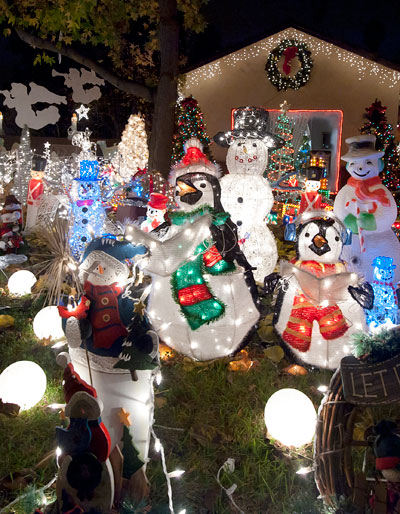 It’s that wonderful time of the year where your neighborhood brightens up with cheery lights, jolly Santa Claus figurines on people’s lawns, and other festive decorations to signal the holiday spirit.

Many Santa Clara residents invest a lot of time and energy into setting up their decorations in front of their houses to spread the cheer. To recognize some of these decorators, the city of Santa Clara recently announced the winners of its 25th Annual Holiday Decorations Awards program.

“[The nominations] were judged on originality, use of lighting, color, and festivity,” says Elizabeth Elliott, office specialist for the City Manager’s Office. “We had staff and volunteers from the senior center go out and see every single house and business that was on the nomination list. There were six winners for individual homes. There were also categories for best neighborhood, best tree, and best business. Each winner receives a metal sign for their yard that announces they are winners. The winners will be recognized at our council meeting on January 10.”

Wally Ed, manager of Seniore’s Pizza on 940 Monroe Street, oversaw the decorating of his restaurant. Streaming lights dangle from the front of the restaurant while figurines on the rooftop catch the attention of those passing by.

“We won an award last year and we wanted to try this again,” Ed says. “It’s nice to do something good for the customers, to show them our appreciation.”

For Randy George, this year would mark the third year he has won the holiday decoration award for his home. George, who lives at 1882 Homestead Road, spent a month decorating the front of his house with the help of his wife and two children.

“We are displaying a Nativity scene and a winter of fun theme with penguins and snowmen,” George says. “Also displayed at our house are rocking horses, presents, candy canes, peppermint candy, and a Santa’s workshop. We sometimes build or refurbish some of our items. We constructed our angels on the trees from plywood.”

Tom Chavez, who lives at 345 Sloat Court, won the holiday decoration award for the seventh year. Not only are there seasonal markers at the front of his house, favorite children’s characters such as Sponge Bob and My Little Pony sit in front of his garage.

“We started installing the decorations the day after we took down our Halloween decorations,” Chavez says. “My wife and eight-year old son, Ben, [helped me decorate.]

My wife draws, paints, and cuts the pop-culture figures. It’s amazing how many people come by our house and they take pictures in front of it with their children. We have one friend who used our house as a background for their Christmas card photo.”

This year Rick Crocker of 4292 Burdick Lane claims an award for the neighborhood decorations on his street and his second holiday decoration award. Crocker decorated his house in two days with help from his wife and two daughters. A Santa Claus in an airplane taking off on a runway and sparkling seasonal decorations mark the front of his house.

“My daughters love this because it’s just fun to do,” Crocker says. “When I was growing up, I used to decorate the house for the holidays with my dad. So when I do this, it reminds me of my dad.”

Crocker is also pleased that his street won the neighborhood award.

“In front of our house there’s a hedge that goes from one end of the street to the other,” Crocker continues. “And that was lit up by all the same lights. And then everyone added their own decorations from there.”

Crocker advises those who wish to enter the decoration contest for the first time next year to just enjoy the experience.

“Have fun with it,” he says. “Do what you enjoy because there are no rules in doing this.”