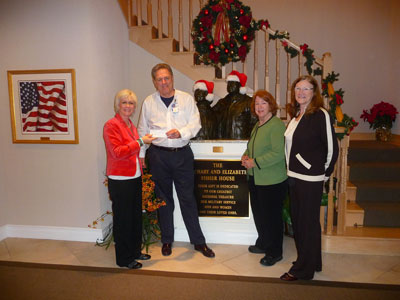 You can’t put a price on the value for injured soldiers of having family close by. Hotel rooms, however, do have a price – and often it’s one that’s out-of-reach for the families of severely injured soldiers being treated at the poly-trauma unit in the Palo Alto VA hospital. But thanks to Palo Alto Fisher House, these veterans’ families have a home away from home right next to the medical center’s grounds.

To help Fisher House support those who have sacrificed so much, on Dec. 14 the Santa Clara Chapter of the Daughters of the American Revolution (DAR) presented the home with a $4,000 donation. The DAR contributed to the Fisher House’s initial construction and its continuing support is one of the DAR’s central undertakings.

One of 54 Fisher Houses in the U.S. and Germany – built and financed by the non-profit Fisher House Foundation and operated by the U.S. Department of Veterans’ Affairs – the Palo Alto Fisher House has been providing free lodging for 60 to 70 families a month since 2006. But even at that rate, many families are still on the waiting list for a spot at the Fisher House.

Although the survival rate for combat injuries now tops 90 percent, many of these soldiers come home with severe bodily damage combined with traumatic brain injuries caused by explosives – sometimes called the ‘signature injury’ of the Iraq and Afghan wars. For these men and women, rehabilitation is measured in months and years.

Palo Alto VA Hospital is the only poly-trauma center for active military personnel and veterans on the West Coast, explains Fisher House Program Assistant Alan Armstrong, and is the major intake facility for the entire Pacific Rim. Many of those who have suffered severe injuries will need frequent hospitalization and medical treatment for the rest of their lives, he says, and their families play important roles in their medical care.

To serve more families, the Palo Alto Fisher House will soon begin raising money for a second house. Half of the construction costs will be donated by the Fisher House Foundation and the remaining money must be raised by the local community.

“Just as the Santa Clara DAR has been an active supporter of the first Fisher House in the Bay Area,” says Judy Brown, Santa Clara DAR member, “We plan to play an active role in the expansion as well. Serving those who have served us at such personal cost is at the core of the DAR’s mission.”

Home for the Holidays a WeCARE Success