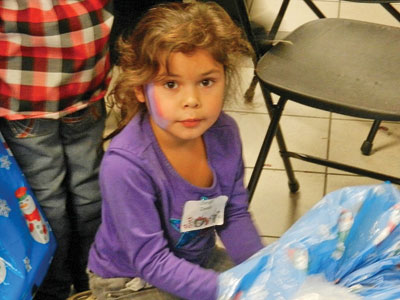 “Um…excuse me. Do we have to give all of these back?,” asked Jordan, 6, of Kathryn Hughes Elementary School.

“No, everything in that bag and the jacket are yours to keep,” was the response to Jordan’s question.

Jordan’s eyes lit up when she heard the answer. “Yay!” she exclaimed as she bounced up and down.

Jordan’s question was heartbreaking, but not uncommon. How many of the Santa Clara children who were invited to Stevens Creek Lexus on Thursday, December 8, had never received a Christmas, or even birthday, present? How many of those children play with friends old toys or with broken hand-me-downs from their older siblings so they can have toys of their own?

Each of the 151 kids at the annual Rotary Christmas for Kids event was a child chosen by the school principals in the Santa Clara School District as a child in need. Many of the children come from poverty-stricken and broken homes, or have been affected by this country’s economic conditions and each child would have, most likely, not received any gifts this holiday season if it wasn’t for the Santa Clara Rotarians and Kaiser Permanente.

Santa Clara Rotary and Kaiser Permanente teamed up to ensure each of the 151 chosen children were given something special this year.

On Tuesday evening, many prominent Santa Clara businessmen arrived at Eastern Furniture on Comstock Street dressed in their work attire. They didn’t show up for a special meeting or a fancy event. Every Rotarian, and many of their spouses, went to wrap gifts.

From 6 p.m. until approximately 8 p.m., Eastern Furniture was full of holiday cheer. Rotary Club members placed the nine gifts that each child would receive on Thursday into a large, clear plastic bag. The bags were tied and set inside holiday-themed colorful bags. The bundle of gifts was then given a tag with the recipient’s name and carried to the loading area of the store.

When Thursday came, Stevens Creek Lexus was full of penguins, Santas, snowmen, stockings and candy canes, along with large racks of coats. In addition to the gifts, which included various educational and fun children’s activities, each child was given a new winter coat, a much-needed gift as temperatures have began to drop into the 30s at night.

After a meal of vegetable or meaty lasagna, grapes, garlic bread and milk, the entry way was cleared for the main event. Santa came riding in on his sleigh (a convertible Lexus) and greeted the eager children. Once Santa was seated, the children were given their gifts. But, it wasn’t a free-for-all. Each child’s name was individually called. As they approached the front of the event space, they were handed their bag of goodies, their new winter coat and given the opportunity to have their photo taken with Kris Kringle himself.

As the presents were opened, many of the kids were excited about their new gifts. Jose, also of Hughes Elementary, face lit up when he saw a building activity set. He then scooted over to his friend, Isaih, to see what gifts he received.

Thank yous were said as Santa left the building. And, while it might not seem like much, each of the 151 students from around Santa Clara, received more than just a handful of gifts. They were given something they may not have gotten without Rotary and Kaiser: a Merry Christmas and the knowledge that someone, somewhere wanted to give them something special.

Rotary International is an humanitarian organization of businessmen and professionals with a commitment to “Service Above Self.” For additional information on the Santa Clara Rotary Club visit www.clubrunner.ca/santalcara/.