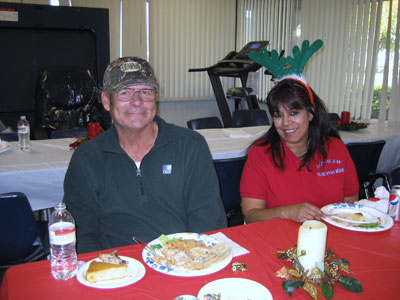 No time is good but during the winter holidays is surely the worst of times to lose a roof over your head.

“$300 is the difference between being homeless or not,” says Constance, who lost her apartment November 1 after losing her job and coming up short on rent money. She lost all her belongings, too, because she couldn’t afford a storage unit. Then she caught pneumonia while sleeping in her car for two weeks. Following treatment at the VA Hospital in Palo Alto, she is now in the medical respite program at the EHC LifeBuilders Boccardo Center, 2011 Little Orchard Street, San Jose.

Constance was the only woman veteran at a holiday party for about 30 homeless veterans at the EHC center December 10. South Bay Blue Star Moms and Texas Instruments (TI) in Santa Clara teamed for the third year to throw the party.

“We’re excited about the opportunity for our vets to be remembered and receive gifts for the holidays,” says Liz Griswold, volunteer manager for ECH Lifebuilders, which serves 600 vets annually at its Boccardo drop-in counseling center. It houses 32 each night in its onsite bed program for veterans.

Blue Star Moms, wearing red shirts and reindeer antlers, and TI volunteers chatted with the vets over a Mexican food lunch, and everybody sang holiday songs to guitar accompaniment.

“It’s really good being here. We sit and talk with the vets. They talk about their experiences in war,” says 11-year-old James, attending the party with his mom. “I feel like I’m making a difference in helping people.”

The volunteers presented each veteran with a sturdy backpack filled with items such as a rain poncho, blanket, shirt, socks, hygiene supplies, and scarves and caps made by Green Planet Yarn Charity Knitters.

“Whoever knit the scarves in our backpacks, tell them we appreciate all the care, concern, and love that went into knitting them,” says Constance, who studied at the Defense Language Institute in Monterey and was a Russian translator for the Air Force from 1972 to 1980.

“Homeless vets are a problem. Don’t forget us. There’s a lot of us,” says Tony, an Air Force Veteran who served in Vietnam and has been homeless two years. “Everything fell apart all of a sudden. Then my health went. It’s frustrating when you’ve worked all your life.” Tony’s story was echoed by Lorenzo.

“It’s tough after working 24 years to be homeless. I was self-sufficient for many years,” says Lorenzo, who served in the Air Force from 1976 to 1980. He became homeless almost two years ago following a medical disability and personal problems.

“We want to thank you for your service to the country and all you have done. This is a way of showing our appreciation and wishing you a brighter new year. All the best in 2012,” says Joan Scott, Director of Community Relations for TI, at the end of the party. TI covered the $3,000 in expenses for the vets’ backpacks and lunch.

“Alcohol and drug addiction is the number one cause of homelessness among vets. Mental illness [such as PTSD] is a close second. Sometimes they have both. And perhaps 80 percent have criminal records,” says Williamson. “It’s a very challenging task with those kinds of barriers to employment, but we have an awesome team.”

“What a blessing. All this is a blessing. And I just got a job driving a truck,” says Navy vet Tim as he takes his backpack and heads outside.