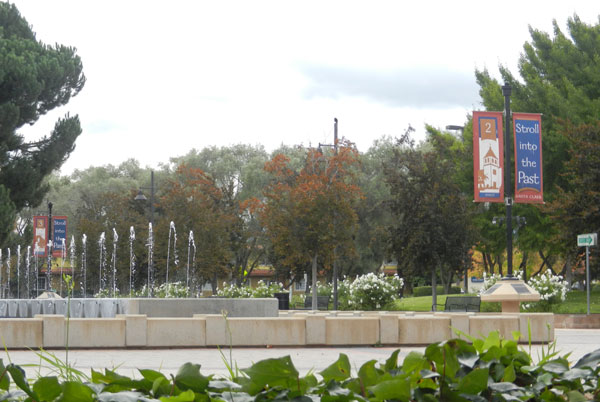 Take a stroll in to the long and interesting history of the City of Santa Clara at the Santa Clara Civic Center’s Stroll into the Past exhibit. The self-guided tour, which was created when Santa Clara celebrated its 150th anniversary in 2002, contains seven stations. Each station is comprised of four plaques that trace Santa Clara’s history from the early Native American settlers to its current status as the Silicon Valley, an internationally recognized area of technology and innovation.

Banners line the backside of City Hall, making the tour easy to find and easy to follow. Each banner states the station number, subject matter and the “Stroll into the Past” tour title. Moving in a counterclockwise motion, the tour will guide visitors through topics like American Settlement and Immigration.

Tour takers start with “The Valley”, which includes information on first Native American settlers, the Ohlone people. The plaques also mention the original landscape of the Santa Clara Valley. “Once, grasslands and oak groves dotted the valley floor and were home to deer, bear, elk, and antelope. Many small streams, edged by willows and sycamores, wound their way to the San Francisco Bay filled with fish and waterfowl,” is one of the statements made about the valley prior to settlement.

“Mission” is the second stop where Santa Clara’s Mission Santa Clara de Asis, the expedition of Juan Bautista de Anza and the Californios are discussed. As one of the 21 California missions, Santa Clara de Asis was founded in 1777 by Father Junípero Serra, is on the Santa Clara University campus, and is another great place to spend a history-centered afternoon.

American settlers arrived in the Santa Clara Valley during the 1830s and thousands of immigrants made the trip in search of land, but the City of Santa Clara didn’t begin to take shape until the late 1840s. Information on the Gold Rush, California statehood and incorporation of Santa Clara as a California city are part of the third station, “American Settlement.”

Moving from “American Settlement” to “Agriculture”, it is made known that Santa Clara is a city rich with agricultural significance. Ranches, farms, orchards and the canning industry are all important parts of this city’s history. “…Vast herds of cattle ranged over Santa Clara’s grazing lands and the hide and tallow industry boomed…wheat and grain were the primary crops until the 1880s, when farmers began to diversify…by the early 20th century, 100,000 acres of valley land were planted with fruits and nuts including cherries, pears and peaches.”

As the agriculture business took off, Santa Clara needed settlers to help run the farms and grow the city. “Immigration” of the German, Portuguese, Mexican and Asian immigrants have all influenced Santa Clara’s culture. The Portuguese community remains one of the most active and close-knit communities in the city and “in the 2000 census, about one-fourth of all Santa Clara residents were of Asian descent.”

As more and more settlers made their homes in the Santa Clara Valley, “Transportation” between Santa Clara and rest of the Bay Area became vital. The Alameda, built in 1799, was originally a toll road and is still a major road today. Railroads and highways began to take shape in the mid-1800s and in 1960 the Santa Clara expressway system was created.

Finally, the birth of the “Silicon Valley.” From defense to high tech, Santa Clara remains at the forefront of these innovative fields. With some of the most cutting-edge businesses located in Santa Clara and the surrounding cities, the Santa Clara County will forever be etched in minds of consumers, both domestically and globally, as Silicon Valley.

The Stroll into the Past tour at 1500 Warburton Avenue across the street from the Triton Museum of Art and takes approximately 20 minutes to complete. For more information, or to virtually take the tour, visit www.santaclara.gov.