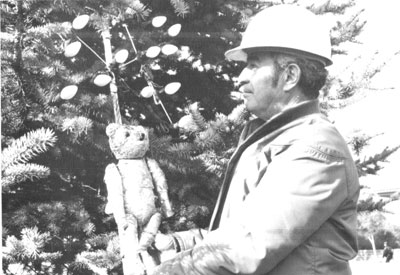 One of Santa Clara’s most venerable traditions is turning 100. On Friday, Teddy, the stuffed animal donated in 1911 by Alice Dixon Hillis, will make his hundredth trip to the top of the city’s 60 foot Christmas Tree.

The story of how Hillis’ bear came to be a city mascot has been told and retold many times. In 1911 her father James Dixon was superintendent of the city’s new electric company. Mr. Dixon was also in charge of decorating the city’s Christmas tree, which he had personally selected and cut.

“My Dad needed a top for the tree so he ran in and grabbed my teddy bear,” Alice Dixon Hillis told the Santa Clara American Weekly in 1988. From then on the bear topped the tree every Christmas.

Every Christmas, that is, until Joe Base became city manager in the 1950s.

Perhaps haunted by the spirit of urban renewal yet-to-come, the scoundrelly Base replaced the aging Teddy with a “bran-new” bear. Electric department employees remained faithful to city tradition and continued to secretly perch Teddy on the tree. Some say it was divine judgment when a winter storm literally blew the interloper away one year, never to be seen again. The following Christmas, Teddy was restored to his treetop throne.

By 1987, the 76 year-old bear was showing his age, prompting reporter – and resident philistine – Bob Savage to write in the November 18,1987 edition of the Santa Clara American Weekly, “Nix the bear.”

Despite Savage’s recommendation that the city give Teddy a decent burial and welcome future holidays with a new mascot, the Santa Clara Women’s Club stepped up to the plate and gave Teddy a makeover. Good Samaritan Evelyn Carmichael refurbished Teddy in time for him to sport his new threads for the 1987 holiday season.

An El Niño in 1998 put Teddy in peril for a third time. Rain left the ground too soft for electrical crews to get a bucket truck near the tree and take Teddy down. Teddy stayed until Spring, when local birds began to scavenge his fur for nesting materials. For a second time, Evelyn Carmichael came to Teddy’s rescue with needle and thread. Today Teddy looks as good as new. “With the way society moves around today, it’s nice to have some tradition,” Alice Dixon Hillis told the San Jose Mercury News in 1988.

In honor of this year’s centennial, the Dixon Hillis family has been invited to light Santa Clara’s 2011 tree this Friday and a special City Proclamation will mark the anniversary. “Teddy” will also meet and greet the crowd, according to well-informed sources at City Hall, and children are encouraged to bring their own teddy bears to have hot chocolate and cookies with him. To get a special commemorative Teddy ornament (one per family) bring a canned food item or new teddy bear to donate.

Many city departments pitch in every year to the success of Santa Clara’s annual Christmas Tree lighting. The City’s Parks & Recreation Department organizes the event. Community groups, Youth Commissioners, and public safety departments provide entertainment and refreshments. And of course, the city’s municipal electric utility, Silicon Valley Power (SVP), gallantly escorts Teddy to the top of the tree each year and lights it with renewable energy from Santa Clara Green Power.

Community
Author AdminPosted on September 5, 2012
It was a lovely Saturday in August when over 70 ladies gathered in The Adobe courtyard. The women sipped cool libations and awaited the...

Community
Author Diane AndrewsPosted on February 21, 2018
After a delay until Jan. 15 because the crabs needed more time to reach maturity, the commercial Dungeness crab season in the Bay Area...