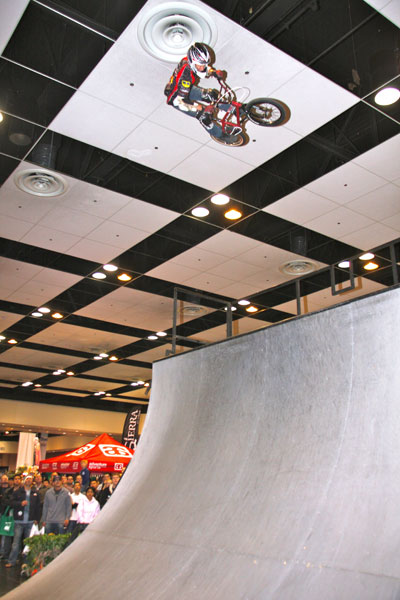 Admission to the event was $20, which gave patrons access to one of biggest equipment sales of the year and allowed them to sample energy bars from Clif, shakes from B Fast and drinks from 5-Hour Energy as well as watch a BMX and skateboard exhibition with flatland specialist Pete Brandt, skateboarder Phil Hajal and BMX biker John Parker. For an additional $20, those of age could participate in wine tasting on Saturday or beer tasting on Sunday.

Most people attend for the deep discount on products and free lift tickets to Bear Valley, Dodge Ridge and China Peak Resort, which came with the price of admission. “This is where you get the best deals,” said Joey Johnson of Fremont. “You can never have enough snowboard stuff.” After spending “way more than I had planned,” Johnson left with new bindings, a jacket, pants and Twisted Bindings, a new product for the 2011-2012 season.

The San Clemente, California-based company formed in December of 2010 and spent last season testing out the products. Twisted Bindings, which are a binding enhancement product mounted to the snowboard under the rider’s traditional bindings, were available to customers for the first time in August. “They give comfort and maneuverability on flats and lifts,” said Jacklyn Lineback of Twisted Bindings. “You can switch up your stance on-the-go by lifting up the spring-loaded the pin.”

Plenty of ski resorts like Squaw Valley, Mammoth Mountain, and Sugar Bowl in California, Mt. Bachelor in Oregon, Park City in Utah and Sun Valley in Idaho had booths and big names in ski and snowboard equipment like Burton, Salomon Snowboards, Dynastar and Atomic were in attendance. Many of the exhibitors were offering giveaways for resort packages or products.

Johnson, who buys a yearly pass to Heavenly and Tahoe, claims to have entered about 10 of the available contests and was most interested in winning “a couple of free lift tickets to Whistler. That would be awesome.”