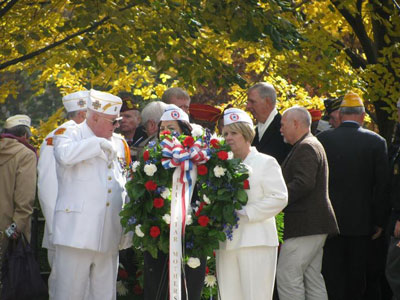 South Bay Blue Star Moms Linda Bayer of Santa Clara and Gloria Cervantes of Mountain View were chosen by the national Blue Star Mothers of America (BSMA) to be part of a five-person delegation representing military mothers in the wreath-laying ceremony at the Tomb of the Unknowns at Arlington National Cemetery in Virginia on Veterans Day, November 11.

“This experience would not be possible for me had my sons not joined the military,” says Bayer, who is local and national Patriotic Instructor of the BSMA. “It’s an honor for me as their mom to go and represent them and other military that have served. It’s an honor beyond anything I could have imagined.”

Bayer’s twin sons both served in the Air Force. Ryan Bayer served two years at Mt. Home in Boise, Idaho. Now a reservist at Travis Air Force Base, Jared Bayer has served seven years, which included two deployments to Iraq and one to Qatar.

“This is the opportunity of a lifetime,” says Cervantes, who was born in Mexico and moved to the U.S. when she was three. “I became a U.S. citizen and have a daughter in the Navy. To now be a part of the national Blue Star Moms organization and, even more, to be the national chaplain—a sacred position—is such an honor….It’s such an honor to serve and give back to the community.”

Cervantes’ daughter, LCDR Christina Ortega, graduated from the United States Naval Academy, Annapolis, Maryland, in 2001. Ortega has served in the Iraqi town of Fallujah and flown missions as a navigator on the Lockheed P-3 Orion. She is now studying for a Masters Degree at the Defense Language Institute in Monterey.

“Being a female in a man’s world is still a struggle for women. I’m proud [Christina] has been able to serve her country and make a difference,” says Cervantes.

President Barack Obama, attending the 2011 Veterans Day ceremony with First Lady Michelle Obama, placed a wreath on a pedestal in front of the marble Tomb of the Unknowns and later delivered remarks in the Memorial Amphitheater adjacent to the tomb.

After the President, the Blue Star Mothers of America was one of about 40 groups honored also to participate in the wreath-laying ceremony on the cold but sunny day. Cervantes and the 1st BSMA vice president presented the wreath on behalf of the mothers. It is the first time members of the South Bay Moms Chapter, formed in 2004 to support local families of troops in active service, have participated.

“Until you’re a military mom or have someone serving in your family, you don’t realize how hard it is,” says Cervantes.

Holiday CARE packaging for the Troops takes place 9 a.m. to noon, December 3, at the American Legion Post. Visit the website for items to donate ahead of time, including encouraging cards, letters, and postcards.

Walking in a Whisker Wonderland at SVACA