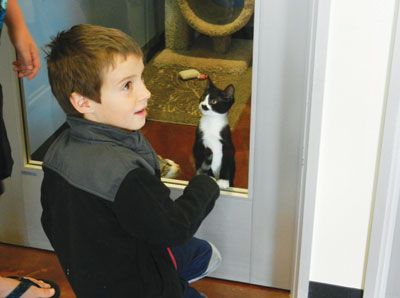 When Silicon Valley Animal Control Authority teamed up with Humane Society Silicon Valley, San Jose Animal Care Services, Santa Clara County Animal Shelter, Palo Alto Animal Services and Town Cats to “Empty Our Shelters” last month, 37 of SVACA’s dogs and cats found new homes, but due to an increase in warmer weather, kitten season has gone on longer than anticipated. In order to get the word out, SVACA held its winter adoption event, Walking in a Whisker Wonderland on Saturday, November 5. Prior to the event, SVACA had 77 cats/kittens and 11 dogs available for adoption, which was the most the organization has ever had.

One of the reasons SVACA has been able to save more animals is due to the increase of volunteers helping with the foster program. “We have great foster parents. Kitten season is usually May through November, but we’ve had unusually warm weather this year and have seen an increase in kittens,” said Shelter Manager Michael Limper.

SVACA typically holds this event in November, prior to the holiday rush, because it’s a slower time for the shelter. “We do it before the holidays because people often get wrapped up with the time of year and don’t think about adopting,” said Eva Schmitz, president and treasurer of Friends of SVACA, the shelter’s non-profit organization.

Schmitz and other members of Friends were on hand to man the raffle and snack tables, answer questions and promote some of the great things Friends does to help SVACA, like the S.H.A.R.E.S. card and the spay and neuter voucher program which provides up to 80% off the cost of a spay or neuter to households with incomes of less than $50,000 in Santa Clara, Campbell and Monte Sereno.

The Whisker Wonderland event gave potential adopters the ability to pay what they wanted in adoption fees. “Folks will typically pay the normal price or more,” said Limper.

“We are always pleased when we have an adoption,” continued Limper who stated that the organization follows up with the new parents once the adoption is complete. “We call at two weeks, six months and a year.” The calls are done to make sure the transition from shelter to home are going smoothly and the animal is adjusting to the new living arrangement. “If there’s a problem, we can give them advice.” Limper also states they maintain a good relationship with the new families and love receiving photos of the companion animals enjoying their new life.

Overall, 19 animals, including Cordelia, a long-term rabbit resident, were adopted during the event. But, there are still plenty of adoptable animals in SVACA’s care, including Bruno, a year old tan and white Pit Bull, a handful of black cats like Julip and Brandi, and Dylan, a 5-year-old orange and white male tabby.

Arts & Entertainment Community
Author AdminPosted on August 10, 2011
On Sunday, August 7, Cool Under Pressure rocked the Central Park Pavilion by playing something for everyone like Tom Petty’s Mary Jane’s Last Dance,...
Community
Author AdminPosted on February 16, 2011
Hundreds of people walked through the doors of Humane Society Silicon Valley February 12 looking for a special Valentine. The shelter was hosting its...

Community
Author AdminPosted on June 12, 2018
Treat the father figure in your life to some amazing deals this weekend. Please keep in mind that participation may vary by location and...
SPONSORED