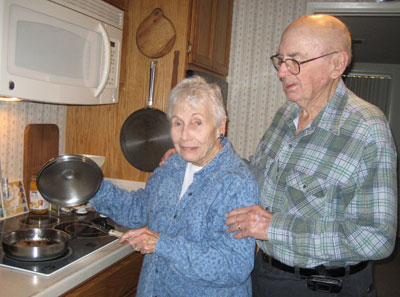 If you want to lose weight, eat alone. In his 2006 book Mindless Eating, Brian Wansink, PhD, notes a study showing that you eat about 35% more if you eat with one other person, 75% more with four at the table, and 96% more with a group of seven or more. This phenomenon—social facilitation—helps explain why seniors who live alone sometimes lose interest in eating and become malnourished and underweight. It’s just no fun to eat alone.

“It feels awkward to eat alone. Seniors crave companionship. But people without appetites will eat bite for bite with caregivers. Sitting across from someone eating, you feel like eating,” says Brian Jackson, co-owner with his wife, Trina Jackson, of the Home Instead Senior Care franchise located in Campbell and serving Santa Clara County (408-370-6360).

In a recent study of senior nutrition, 1,000 seniors 75 or older who live alone were interviewed by phone. Jackson writes that “loneliness is identified as one of the most serious obstacles to good nutrition for our senior loved ones. In the United States, approximately 40 percent of the population age 75 and older lives alone. That’s about 6.7 million people, according to the U.S. Census Bureau.”

As one way of addressing the issue of senior nutrition, Home Instead Senior Care launched a national “Craving Companionship” Homemade Memories recipe contest, which ended September 15, to encourage families to help their seniors stay connected socially and eat more nutritiously.

For some families, having a caregiver is the answer.

“It’s easier to eat when my caregiver is around. It makes it more enjoyable,” says 74-year-old Bob, who lives in a senior facility in San Jose and tries to be as independent as he can despite having Parkinson’s Disease.

“Bob eats lots of vegetables now; he never used to. We even scramble them in his eggs,” says Carol Blaisdell, Bob’s caregiver for almost two years.

Watson, 88, and Norma, his 87-year-old wife, also live in a facility for independent seniors. They, too, eat better thanks to caregivers who help plan meals, shop for groceries, and prepare food for them.

“If I stand up too long, my back bothers me. If I didn’t have anybody, I’d have to fix the meals myself, so having a caregiver relieves me of the task,” says Watson. “We don’t eat that much, but we try.”

“It’s a relief for family once they get a caregiver. It’s a weight lifted off their shoulders,” says Blaisdell, whose own mother fell and needs a caregiver. “I thought about caring for her myself, but she wouldn’t have listened to me.”

“Sometimes people who need care pay more attention to someone outside the family. Plus, a professional caregiver is more experienced. You shouldn’t feel guilty about bringing in someone else. It’s going to be less stress for everyone,” Blaisdell says.

Santa Clarans Ann and Don, both in their 80s, still live independently in their own house. They have to plan menus around dietary restrictions and doctors’ appointments.

“It’s difficult. I like to cook, but I get physically tired and give out,” says Ann, who does the cooking. “I wouldn’t do as well all by myself,” she adds. “When you’re forced to think of the other person and his needs, you make more effort.”