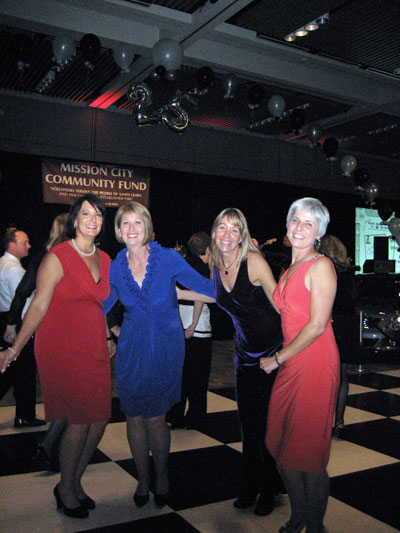 The 25-year-old Mission City Community Fund (MCCF) started in hard economic times and continues in hard times to benefit Santa Clara and Silicon Valley nonprofit organizations and programs. Since its beginning in 1986, the volunteer service organization has raised more than $2 million for grants awarded each spring and fall.

MCCF’s 2011 annual charity auction and dinner dance—its premiere fund-raising event—was held Saturday evening in the Mission City Ballroom of the Santa Clara Convention Center and attended by about 500 charity-minded supporters. Many of them donated items then turned around and bid hundreds of dollars on other donated items in the silent and live auctions. High bidders got everything from a Kid’s Dream Birthday Party for 10 at a Santa Clara firehouse to an away game trip for two with the San Francisco 49ers on the team plane.

This year, $200 thousand in grants has been awarded to 52 carefully-screened nonprofits in five areas: theater and the arts, social services, education, health care, and the environment.

“To give over $200 thousand to people who really need it is a huge accomplishment for a small non-profit organization like our group,” says Pat Kolstad, MCCF charity auction co-chair along with native Santa Claran George Nobile.

“To give to those less fortunate is a very powerful feeling,” says Nobile, owner of Vito’s Trattoria in San Jose. “It makes my heart feel good to support MCCF and directly to help recipients such as Meals on Wheels, which we just funded for one thousand meals.” (Surely a cause especially dear to the heart of a restaurateur.)

The opportunity drawing grand prize of a 2012 Infiniti G37 sedan, provided by Frontier Infiniti and Peninsula Infiniti, was won by Ruben Diaz from Castroville. Diaz is happy, indeed, that MCCF board member Miles Barber talked him into buying a drawing ticket.

One of the 50 dinner tables for ten included Rotarians Mohammed M. Nadeem, Ken Rowell, Tony and Mimi Avelar, and Andrew and Karen Ratermann.

“It’s a fun evening out, and everybody is in a good mood,” says Karen. “We raised our family in Santa Clara, and the MCCF keeps dollars in the community.”

Dave DeLozier, who is the third generation to own and operate Peterson’s Insurance in Santa Clara, was named business leader for 2011 and received the George Burdick Small Business Award. DeLozier quoted Winston Churchill:

Visit www.missioncityfund.org for information on the Mission City Community Fund.