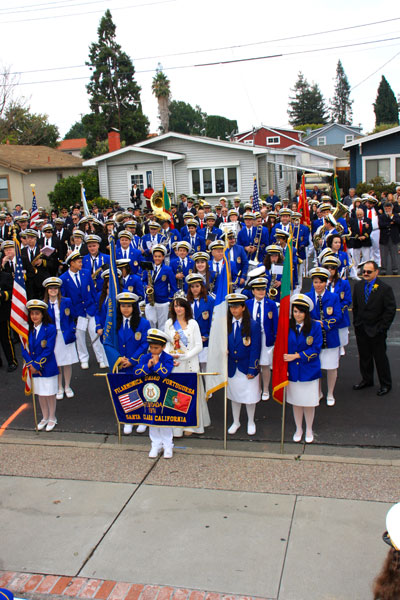 The rain held off on Saturday, November 20 as over 500 musicians from the North Bay to San Diego lined Lafayette Street in front of the S.E.S. Hall for the eighth annual Festival of Portuguese Bands of California. The festival, which combines Portuguese culture, cooking, composition and camaraderie, has been held in different cities across the state since its inception in 2003.

Fourteen Portuguese bands were presented to onlookers to kick off the event. Each band, introduced in order if its founding, played a short musical piece during a formal introduction. The parade-like entrances concluded with the anthems of both the United States and Portugal followed by a musical number entitled Alma Portuguesa composed and conducted by Santa Clara’s own Júlio Matos.

Assembly General Secretary of the Sociedade Filarmónica União Portuguesa de Santa Clara, João Arruda, served as the master of ceremonies for the event and was given the task of presenting each band to the audience and addressing the crowd during the event.

The music momentarily subsided as recognition was given to those who helped make the event possible. Santa Clara Mayor Jamie Matthews then addressed the crowd, calling the festival a “wonderful event. It made my heart swell with pride when I saw the flag of Santa Clara and heart sing when I heard the United States national anthem alongside the Portuguese anthem,” said Matthews. Matthews went on to say Santa Clarans and the Portuguese were one in the same due to the influence the Portuguese have had in the growth and culture of the city.

Matthews, who made his love of and excitement about the Portuguese food clear, warmed the hearts of all in attendance when he said, “on a day that is cloudy and cold you brought sunshine into the city.”

After each band leader was honored, guests were encouraged to move the celebration behind the S.E.S Hall where attendees could partake in an auction and raffle, listen to each band perform a three-song selection, dance the day away and, for a small fee, purchase traditional Portuguese food.

At the event it was announced that the ninth annual Festival of Portuguese Bands of California would be held in Tracy on November 3, 2012. Matthews made sure the event organizers knew the festival would always be a welcome celebration in Santa Clara. “You’re always welcome in Santa Clara,” said Matthews. “Come home to Santa Clara.”

The various Portuguese communities around the state work with two goals in mind – promoting Portuguese pride and heritage through various activities and to encourage Portuguese youth to get involved within their communities. For more information on S.E.S. Santa Clara visit www.sessc.com.

Walking in a Whisker Wonderland at SVACA

Downtown San Jose Festivities for the Family over Thanksgiving Weekend

Community
Author Diane AndrewsPosted on December 10, 2014
Not content to keep their blessings to themselves, former Santa Clara mayor Larry Marsalli, 88, Elise, his wife, their three children and their families-four...

Community
Author Diane AndrewsPosted on June 25, 2014
There’s no grumbling about water conservation in Herb and Donna Hutchinson’s Santa Clara home. They love a challenge, and for them, saving water has...