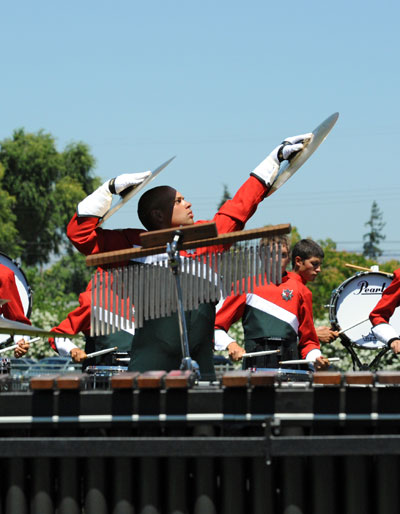 Winners. Undefeated. First place. World Title. Read over the history of the Santa Clara Vanguard, and these words are repeated over and over. Victories over other teams from countries including Europe Canada, Canada, Japan and the United States show the consistency and excellence of the Santa Clara Vanguard (SCV). Not to say they never lose, but more often than not, it seems they’re winning.

However, despite those glowing reviews, looking at the history of the SCV, it’s almost a miracle they’ve achieved anything at all. On March 6, 1967, a disagreement between supporters over the artistic direction of the Sunnyvale Sparks Drum & Bugle Corps, saw the parents vote to disband the drum and bugle corps and return to a drum and bell corps with majorettes (typically a baton twirler who also performs a choreographed dance). After that meeting, three of the adults took some of the drum corps players aside and told them what had transpired. Asked if they wanted to keep the drum and bugle corps alive, they overwhelming supported the idea and a new corps was formed. That night, Gail Royer, a local elementary school music teacher and music instructor for the Sparks, was selected to be the director for the newly formed corps. The name Vanguard was selected after the first practice.

Their winning tradition began one week later when the Vanguard marched and won their first parade by defeating a wide field at the San Francisco St. Patrick’s Day Parade. The Vanguard later competed in southern California at the Anaheim Kingsmen’s Second Annual Festival of Music and finished in 4th place, narrowly loosing to the Diplomats (by 0.15 points). During their trip, the Vanguard faced the US Air Force Academy Drum and Bugle Corps for the first time. On September 30, 1967, Royer honored the first group of corps members who had reached the maximum age for performing (also called age-outs) with the original Green Feather Ceremony at Townsend Field in Santa Clara. In a Green Feather Ceremony, a member who is ageing out performs with a green feather added to their Aussie (their hat).

On August 13, the Santa Clara Vanguard and Vanguard Cadets Drum & Bugle Corps finished their 2011 summer of drum corps competition in Indianapolis, Indiana with seven World Championship performances between the two corps. The Vanguard finished in sixth place in each of the three days of the World Class competition out of a field of 44 other drum corps in the NFL Colt’s Lucas Oil Stadium. Starting in mid-June, the Vanguard performed in more than 30 contests and traveled nearly 15,000 miles across the US. During that time, they entertained nearly 200,000 spectators with their imaginative 11-minute program of The Devil’s Staircase. With the summer competition at the World Championships behind them, members of the corps began high school and college semesters.