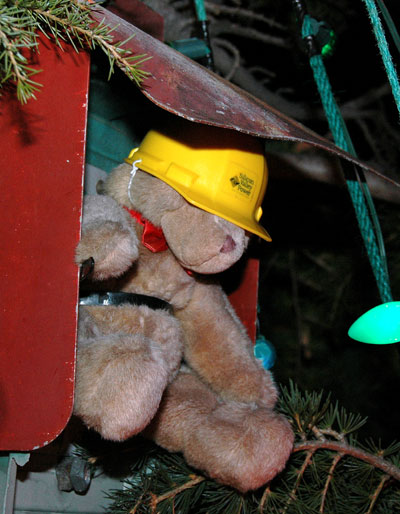 Traditions are commonly thought of as an idea or a concept handed down from one generation to the next. Santa Clara has some fine examples of the recognition of traditions, including the Annual East Egg Hunt, 4th of July Festivities (both with and without fireworks), Memorial and Veteran’s Day Events and in December, the Annual Holiday Tree Lighting Ceremony.

As with past years, this year’s Holiday Tree Lighting was very festive, with close to 1,000 people in attendance to watch dignitaries including the Mayor and much of the City Council, (along with speeches and proclamations), the lighting of the Holiday Tree itself, a visit by Santa Claus, musical entertainment provided by the DeJa’ vu jazz band, complimentary hot chocolate and snacks served by the Senior Center Volunteers, Kettle Corn, face-painting provided by the Santa Clara Youth Commission, the Fire Department’s Fire Safety Trailer and information provided by the Santa Clara Police Department and Silicon Valley Power.

But what set this year apart from other years was singing Happy Birthday to one very special part of Santa Clara’s Holiday Tree Lighting Ceremony. Even though no cake was served and there were no candles, it was still a very special birthday and anniversary, recognizing 100 years of a city tradition, namely the tradition of placing “Teddy” atop the Holiday Tree. Before Teddy went to top the tree, Mayor Jamie Matthews invited the crowd to join him in singing Happy Birthday to Teddy. As one attendee commented, “it’s not everyday we get to sing Happy Birthday to a stuffed Teddy Bear, but Teddy deserves this.”

Prior to the beginning of the evening’s events, a long line of parents and children snaked across the grounds as they eagerly anticipated the arrival of Santa Claus on a city fire truck. Although they would have to wait for Santa’s arrival, this year’s event moved along quickly, as some of the entertainment from previous years was omitted. The feeling over the change was mixed with some attendees saying they were sad that the Sizzling Seniors and the Parks and Recreation Department Dance groups weren’t there. “I’ve been coming out here for years to see my grandchildren dance. It’s still fun but just not as much fun for me.” While others felt, “…this helps the evening move along a lot faster. It was fun to see the dancers, but in (previous years) when the weather’s been much colder, I would worry about the children and the seniors standing around waiting to dance and then catching a cold after they’re done. The weather in some years has been frightful.”

Adele from Mountain View summed up the evening, “Even though the City is facing budget cuts and has had to layoff people, it’s still nice to see this event continue. Other cities don’t even have holiday trees anymore while others won’t use the word “Holiday” out of fear their residents might be offended. It’s nice that Santa Clara hasn’t let this tradition slip away.”