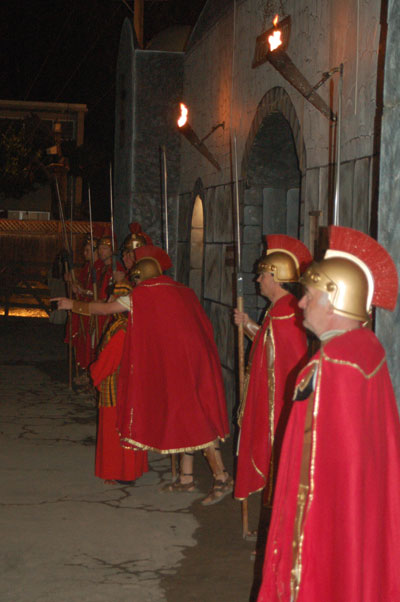 The musical performance featured the three wise men in colorful Biblical costumes was followed by graceful dancers with ringing charms dangling from their dresses. A live camel emerged and trailed what appeared to be a royal procession. The procession led into Bethlehem, where the story of Christmas takes place. Hosted by Santa Clara First Baptist Church from Dec. 8 -12, “Bethlehem,” an annual church event, was an enormous live stage production depicting the story behind Jesus Christ’s birth as shared in the Bible.

Crowds of visitors participated in the live performance as inhabitants of Bethlehem. A vibrant marketplace greeted a visitor entering the “city,” or the main stage of the production. A variety of booths were spread out in the marketplace, including a basket weaving booth, a metal smith booth, a wool spinning booth, and a pottery booth.

Wearing a headdress and a tunic characteristic of Biblical fashion, Yolanda Gallegos was just one of the many cast members in the Bethlehem production.

“I was working in the pottery booth making shekels, which are coins in the days of Bethlehem,” Gallegos says. “My son and are I here to help re-enact Bethlehem.”

Unice Chang, the organizer of the marketplace, was happy to be one of the many volunteers helping to put this event together.

“We love the Lord and we want to serve the community by hosting this event,” Chang says. “This is not only an event given by our church. Other neighbor churches are here to help out too.”

Visitors to Bethlehem also got to experience having costumed Roman soldiers guiding them through the passageway into the city, seeing an “angel” emerging from the top of a roof, and witnessing actors playing Joseph and Mary enter the city. The couple eventually found a safe dwelling so Mary could give birth to Jesus.

People, both young and old, enjoyed the Bethlehem experience. Some attendees were excited by the thought and care that went into the building of the city, the costume designs, and the theater and musical acts. Others found the visual retelling of the Christmas story to be enlightening. Barbara Mclenegan got to engage in some open dialogue about religion with her son.

“We both go to this church,” Mclenegan says. “My son Matt here was just in Iraq and he was telling me how he was able to identify with the religion that the three wise men are from.”