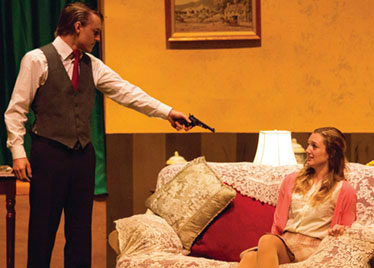 Everyone is a suspect and no one is safe in Agatha Christie’s classic whodunit tale, The Mousetrap, which the Wilcox Stage Company brought to the Mission City Center for Performing Arts stage on May 2-3.

The play opens with an off-stage murder in London and cuts to Monkswell Manor, a guesthouse ran by Molly and Giles Ralston. At Monkswell, the audience begins to meet the murder suspects, and when Giles Ralston (senior Darrell Hubbard) enters the guesthouse, he tucks something away in a box near the doorway, leaving the audience to wonder if he murdered Maureen Lyon before returning home.

As the play progresses, Molly Ralston (junior Victoria Moorwood) appears bit jumpy and paranoid – almost shifty in her mannerisms, especially when there is any mention of the murder and victim’s backstory. Might she have been the one to commit the crime?

In addition to the Ralstons, there are the Monkswell Manor guests (murder suspects), starting with the flamboyant Christopher Wren (sophomore Aidan Turner). While not seeming like the type to kill, his fascination with the macabre keeps him in the midst of the possible offenders.

Miss Casewell (junior Saraiya Haghpanah) could be a murderer. She occasionally speaks of her horrific past and remains aloof throughout much of the performance. Often the quiet ones turn out to be the most violent.

Major Metcalf (freshman Melanie Kent) surveys the scene, occasionally interjecting thoughts and feelings about a particular person, but with so few suspects and so many twists, it could be that Metcalf equals murderer. 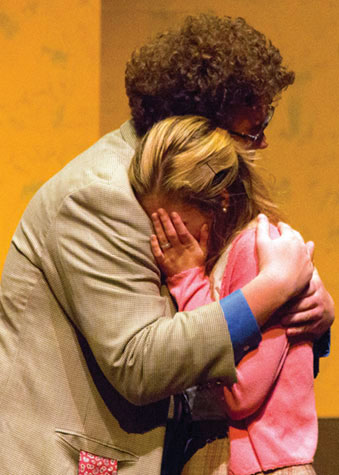 Arriving unannounced is the bizarre and creepy Mr. Paravicini (sophomore Marisa Whitmore). His car just happened to crash outside the guesthouse and he pops in looking for a place to stay. He’s a little bit lecherous and manically laughs inappropriately, leaving the audience to wonder why he showed up and where he came from. Could this random stranger have killed?

Near the end of the first act, Detective Sergeant Trotter (senior Cody Gadornski) shows up at the manor to solve the crime. He questions everyone, turns the Ralstons against each other, and scares Wren to the point of wanting to flee in the middle of a snowstorm. He’s meticulous and calculating, but the good guys are never bad, right?

Finally, the nit picking, shrill voiced Mrs. Boyle (freshman Emma Partridge) is the last suspect in this lineup. She’s prim, proper, and downright unlikable. However, the audience quickly learns that it is impossible for Boyle to commit the crime, as she is strangled at the end of the first act (no one in the audience complained).

To find the killer, Trotter reenacts Boyle’s death scene by asking each character to play someone else and claiming his unorthodox method will bring the murderer to light. Surprisingly, it works and the murderer is quickly found out; but as part of tradition, it has been asked that his or her identity not be revealed so new audiences can enjoy the play. What will be said is that these students do a stellar job – particularly Turner whose mannerisms and delivery bring a refreshing comedic touch to an otherwise serious play. Additionally, those who are dying to know who the killer is, will have an opportunity to see the show as WSC has two additional performances May 10 and 11 at 7 p.m. Tickets are $10 for adults and $6 for students and are available at the door.

At The Edge: Europe Under Fire