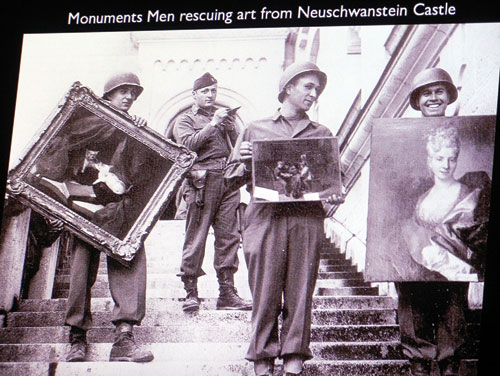 There was a time when art curators had equal value to military intelligence. In fact, during World War II art historians were a vital part of the United States Military.

On April 18, the Triton Museum of Art’s Chief Curator Preston Metcalf gave a lecture about a time when saving the art from Adolph Hitler was as important as winning the war.

“[Hitler] wanted to participate in the art scene – the world art scene…Lintz [Austria] was to become, should his plans come to fruition, the art mecca of the world,” said Metcalf. “This was a lofty goal – there were some pretty serious museums already well-established…Hitler’s plan was very simple. Take the art of all of those museums and bring it to Lintz.”

Hitler would take whatever art he could find when he invaded a town, but he had one small problem – England and America set out to save their art in the most creative ways possible.

Winston Churchill ordered the art to be removed and relocated to abandoned mines. With a constant, cool temperature and ability to withstand the impact of a bomb, mines were the perfect location to store art.

Larger pieces like Michelangelo’s David were bricked in. “They built a brick well around it…and then they poured sand in…if the building was bombed, even if those got hit, chances are they would absorb the shock and nothing else would happen,” said Metcalf.

America hid its art at the Biltmore Estate in North Carolina. “It was away from the coastlines and was the most remote, secure area they could find on the East Coast that had its own private railroad,” said Metcalf. “They brought the artwork in by rails, trucked it to the Biltmore Estate from the railroad, and then destroyed the railroad so that should somebody get there, they wouldn’t have immediate access to move the artwork.”

But the real art saving heroes weren’t those hiding the art – it was those saving the art from destruction. “For the first time in world history, a world leader, President [Franklin] Roosevelt, signed an order saying that the US Military was obligated to preserve and protect all works of art they found in their path,” said Metcalf. “[Dwight] Eisenhower and President Roosevelt ordered the organization of a special unit in the military made up of American and British soldiers…They found every curator, every art historian, every art scholar they could and they drafted them and put them in a military unit that became known as The Monuments Men. Their job was to locate, identify every great work of art they could, and save it…That was a remarkable action to be taken by military leaders. “

Eisenhower and Roosevelt’s plan worked better than expected. Even though some pieces were damaged beyond repair and lost for eternity, Hitler was unable to capture da Vinci’s Mona Lisa, and couldn’t destroy David. Much of the artwork was preserved, and many of the stolen pieces were reclaimed, restored, and returned to its rightful owners. It was one time when scholars worked with military personnel to save irreplaceable artifacts.

Metcalf’s final lecture in the At the Edge of Art History series is Thursday, May 16 at 7 p.m. with “Yes, but is it Pornography?” Drop in fee is $20. Additional information can be found at http://www.tritonmuseum.org/education_adults_arthistory.php. A movie starring George Clooney and Matt Damon on The Monuments Men is scheduled for release this December.