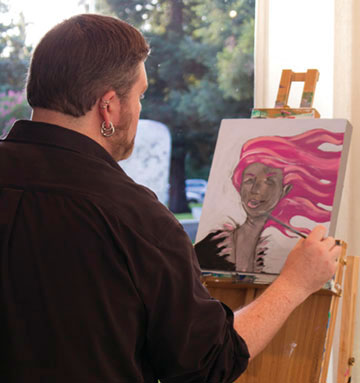 In an event combining food, entertainment, and art, the Triton Museum of Art held its annual gala with an April in Paris theme on April 27.

To help bring the Parisian spirit to the museum, Well-Tempered Flutes provided music throughout the evening. Winner of the 2013 Statewide Photography Competition and Exhibition Ron Dell’Aquila snapped pictures at a photography station. And, four artists, each with their own style, “performed” by creating art pieces during the gala that were auctioned off at the end of the night.

Triton Museum Board of Trustees member Jeff Brambschreiber was one of the live artists and created a beach scene, using pastels, for his contribution. Oil and canvas artist Sandra Smith Dugan painted a still life piece of a vase filled with flowers. Michael Foley, who, according to his website, “takes delight in poking fun at every aspect in society,” began a painting of a girl and scratched it halfway throughout the event, only to begin and nearly complete another painting of a girl during the two and a half hours. Finally, Jaya King, who is no stranger to the Triton and has been featured in various shows throughout her career, painted an orange-hued, branch-like piece for her entry – a piece whose highest bidder ended up being Chief Curator Preston Metcalf’s wife, Kay Korbel.

While perusing the dozens of donated paintings that were up for auction, guests dined on hors d’oeuvres, provided by Catered Too, of polenta cake with a crème fresh topping, chicken cordon blue skewers, crostini with a French onion garnish, and potatoes filled with duck confit. Food stations served appetizer-sized plates of cream-based pasta with vegetables, garlic and gorgonzola mashed potatoes topped with braised beef, and salad with a slice of tuna. Desserts including strawberries, mini eclairs, cream puffs, bite-sized slices of napoleon cake and fruit tortes were served with coffee. Additionally, a hosted bar was included with the $150 ticket price. 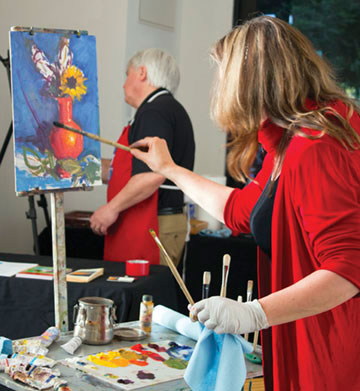 At 7:45 p.m. the first set of paintings, sculpture, and photography auctions came to a close. Fifteen minutes later, the second set ended, allowing bidders the opportunity to ensure they got last second bids in after claiming pieces from the earlier auction. Fifteen minutes after the artwork auctions were complete, the live artists’ auction as well as the silent auction package bidding ended.

Each artist who made a donation placed a value on their contribution – what the piece would be priced at if it were sold privately or through a gallery. The museum then determined what the starting bid would be, often a price much lower than the estimated value. Bid increments were then set. Prices quickly escalated, but most of the pieces went for a steal and many guests left with multiple one-of-a-kind pieces by some of the Bay Area’s most well-known artists. A few of the donated works had even been featured in previous Triton shows.

Any art not bid on could be purchased for the lowest possible bid after the auction ended. “Once we close it, if anyone wants to give the minimum bid, we’ll let them buy it,” said Metcalf. Any items that weren’t purchased were returned to the artists.