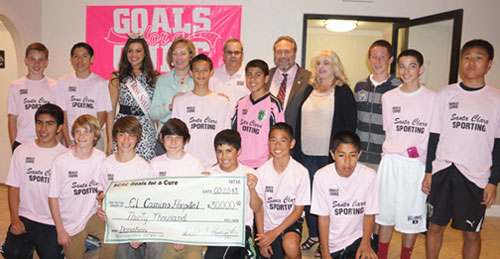 Santa Clara Sporting Soccer Club hosted a ceremony on March 23 to honor the young men and women who competed in the 2012 Goals for Cure Fundraiser. The club also presented El Camino Hospital Foundation with a check for $30,000, which will help provide free mammograms to women in need.

“Breast cancer has touched many families in the Santa Clara Sporting Soccer Club and we wanted to find a way to raise awareness and help our Northern California soccer family and our local community,” said Sebastian Goncalves, club president. “I am proud of the dedication these players have shown in helping the cause and doing their part to help fight this terrible disease for women and men.”

Thirty-six teams competed in the Club’s fifth annual Goals for a Cure soccer campaign last October. Teams competed wearing pink Goals for a Cure jerseys and collected donations through many creative fundraising efforts, including a month-long “goal-a-thon” where supporters made a donation for every goal scored by all Santa Clara Sporting teams.

To thank them for their hard work and incredible efforts, El Camino Hospital invited the players from the Santa Clara Sporting ‘98 boys Black Team – who raised the most money last year – to tour the hospital’s Imaging Services and meet with the staff who diagnose and treat breast cancer patients. Also joining the group was Hayley Talia, who raised $1,159 dollars by herself. The players toured the center and saw firsthand what their hard work was benefiting.

“We are excited to welcome some of the Santa Clara Sporting Soccer Club’s hardest working soccer players who have helped us spread breast cancer awareness, and show them how their donations are aiding our initiatives of early breast cancer detection and treatment,” said Lea Morgan, from El Camino Hospital Foundation. “El Camino Hospital is extremely grateful to all of the Santa Clara Sporting Soccer Club teams who participated in Goals for a Cure.”

Goals for a Cure was founded in 2008 by Kevin and Jason Azevedo after two soccer moms on the Santa Clara Sporting ‘93 boys team were diagnosed with breast cancer, one of whom subsequently died of the disease. In five years, the Santa Clara Sporting Soccer Clubs have raised more than $128,000 to help provide hundreds of women with free mammograms. Forty-eight of women whose mammograms were sponsored were diagnosed with breast cancer and started treatment.

For eligibility requirements, and to learn more information on the Free Mammogram Program at El Camino Hospital, call (800) 216-5556.

Santa Clara Sporting Soccer Club is a high-level competitive amateur and youth soccer club in Silicon Valley. The club is one of the oldest and most successful competitive youth soccer organizations in the United States with more than 600 youth players on 36 teams. Many players graduate to compete in NCAA collegiate programs and at the professional level. Santa Clara Sporting is affiliated with the Santa Clara Youth Soccer League. More information is available at www.santaclarasporting.com

Dig The Scene for Summer Camp

Community
Author Cynthia ChengPosted on February 10, 2017
“Our favorite place might be in front of our gas fireplace in the family room,” wrote Judy Nadler, an ethics consultant and...

Arts & Entertainment Community
Author Alissa SorotenPosted on April 18, 2019
The Friends of Children with Special Needs have a couple of inspiring mottos, one is “be humble, respect others, and embrace diversity.” That motto...
SPONSORED