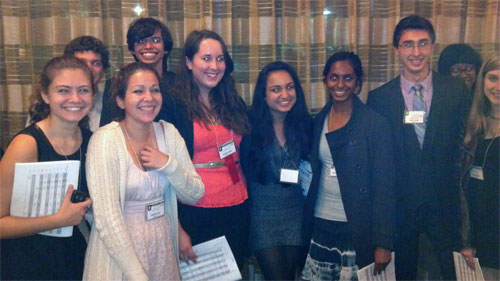 Northern California’s Junior State of America (JSA) fall semester 2012 conference—Crafting a More Perfect Union, A Nation in Transition—was held at the Santa Clara Marriott last November. It drew 840 students from its chapters at almost 100 northern California high schools, including Adrian Wilcox High School in Santa Clara. The students, called junior statesmen, were eager to listen to their peers, form and voice opinions, and debate the sometimes playful but mostly tough topics of our times.

“JSA is a national, student-run organization that strives to get high schoolers involved in and educated about local and national politics,” says Ema Barnes, Chapter President from Lowell High School in San Francisco, in an e-mail. “We are hoping…to spread the word about JSA and to help citizens realize that high schoolers do care and are making an effort to get involved.”

“[The debate topics] are something you may not normally think about, such as personal freedom and national security. It made us think about them more and look at a wide spectrum of issues,” says Natasha from Wilcox High School’s delegation of seven young women and three young men who attended the fall conference.

“The tudents pick the topics. It’s a very student-driven organization,” says Karen Hardy, JSA advisor and math and computer science teacher at Wilcox. “This teaches kids to look at situations, to listen and have an opinion. They learn to verbalize their point of view and why they believe that way.”

“[Participating in JSA] makes me keep an open mind on issues, not judge first, but evaluate points and make decisions,” says Ricardo, a junior statesman from Oakland Charter High School.

JSA chapters (www.jsa.org) are school-sponsored extracurricular clubs, and membership is open to all interested schools and students. Annual JSA membership is $3 per student, and chapters raise funds to cover basic expenses for students to attend events.

The three-year-old Wilcox JSA chapter meets twice a month during the school lunch period. Members are now preparing for the Northern California JSA mock Congress at the Capital in Sacramento on February 2 and 3.

“I am excited [about JSA]. It’s helping kids to become solid citizens. I want the kids to feel like their opinion matters. They’re our future voters. I want them involved and excited about this,” says Hardy. “Democracy only works if we all get involved.”

“When young people are given tools to understand, they make wise choices,” JSA fall conference closing keynote speaker Darcie Green told the junior statesmen. Green is Community & Government Relations Manager for Kaiser Permanente San Jose and a lauded community volunteer and advocate for the rights of women and minorities.

Gary Gillmor Donates $250,000 to Name The Newest Building on the Mission College Campus