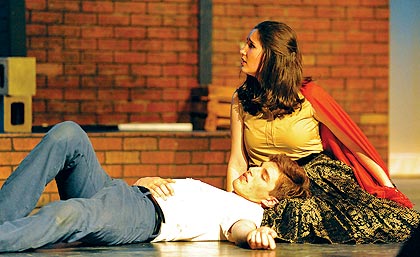 Starting Arts just finished their theatrical production of West Side Story at the Center for Performing Arts at Santa Clara High School. The production ran from May 27 to May 29 with a mere four shows. This version was the work of Starting Arts, whose mission is “…the promotion and preservation of quality arts education in public schools.”

Mission accomplished. The production was a smash hit. What seems to surprise most people is the age range of the actors – from 10 – 18 years old. But don’t let the ages of the student actors give you any expectations that the show will be anything but outstanding. The actors danced, sang and acted their way through what many consider to be a very difficult musical with an ease that belied their ages. But that’s what has come to be expected from a Starting Arts production.

According to the Director, Stephanie Renee Maysonave, “West Side Story is perhaps one of the most dramatic and iconic American M=musicals. Created by some of the most brilliant and creative minds of the last century (Leonard Bernstein, Stephen Sondheim, Arthur Laurents, and Jerome Robbins), the show remains as vibrant, daring, and poignant as ever. The story, of course, inspired by Shakespeare’s Romeo and Juliet, is about love that defies boundaries or conventions. “The action takes place in the late-1950s in New York City as the audience is allowed to bear witness to the on-going rivalry between rival gangs of different ethnic backgrounds – the Sharks and the Jets. Caught in the middle are Tony, a member of the Jets, and Maria, the sister of the leader of the Sharks, Bernardo. In a case of love at first sight, Tony and Maria meet and despite their different backgrounds and the fact that their friends disapprove, dream of a better life together.

The show includes many familiar musical numbers, including Maria, sung by Tony, played by Manny Rodriguez-Ruiz; America; One Hand, One Heart, sung by Tony and Maria, played by Manny Rodriguez-Ruiz and Emily Schneiderman; and Somewhere. But West Side Story isn’t just about singing and acting. Dancing also plays a huge role in the show. Here again, the Starting Arts cast does not disappoint as the complexity of the dance numbers belies the age and acting experience of the actors involved. Even at a dress rehearsal, I found myself thinking I was watching a Broadway production and not something taking place at a local high school, performed by students as young as 10 years old. The acting throughout the production was terrific and best of all, believable.

Forget the comfy seat and you’ll find yourself on the sidelines of the action. Even the role of Officer Krupke, performed by 10-year old Elizabeth Izyumin was first-rate, although her diminutive size had the gang members Krupke is supposed to corral and keep in check towering over her. For more information on Starting Arts, please visit their website at: www.StartingArts.com.