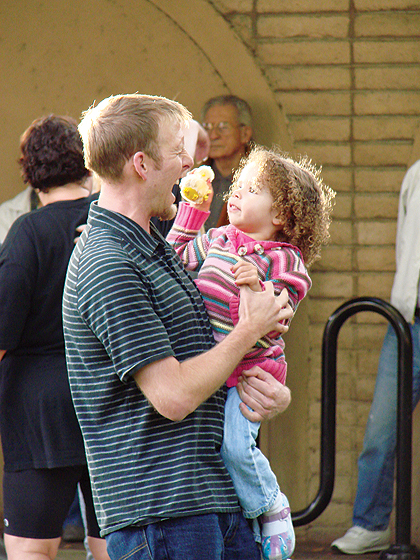 The smell of kettle corn wafted through the air and intermingled with the scent of tri-tip sandwiches and pizza. Wine and beer were sold by the glass and for non-drinkers, there was water and soda nearby. It felt like the Santa Clara Street Dance, but as folks filled the grassy area of Franklin Square on May 20, they realized this was something a little different. They were celebrating our city at the first annual Celebrate Santa Clara event put on by the Santa Clara Chamber of Commerce.

Kaiser Permanente was the main sponsor of Celebrate Santa Clara. KP set up a booth and was giving out reusable shopping bags to those who answered health-related questions correctly. Keypoint Credit Union and Santa Clara Vanguard sponsored the business showcase area and The Mlnarik Law Group was the official band sponsor, bringing in a new band, The Groove Kings, to keep the party going all night long.

The evening started with a set by the Buscher Middle School alumni Déjà Vu Band who performed a variety of instrumental medleys to get people relaxed before the big Groove Kings performance. Santa Clara Vanguard followed with a short show while the stage was being setup for the main event. The Groove Kings kicked off their set just after 7 p.m. and kept people dancing all night long by performing their version of hits like Bon Jovi’s Livin’ on a Prayer, Billy Idol’s Mony, Mony, Tommy Tutone’s 867-5309 Jenny, Van Morrison’s Brown Eyed Girl, Prince’s Kiss and The Temptations’ Ain’t too Proud to Beg. During The Groove Kings rendition of The O’Jays hit Love Train, the crowd followed the music and started their own “love train” through the dance area.

While The Groove Kings were taking a much needed break, Evelyn Carte, an Intel employee, who considers the Joe Sharino Band “her band” and was disappointed not to see Joe and company performing at Celebrate Santa Clara, said she was impressed with The Groove Kings. “They are better than what I thought they would be,” said Carte. “I love to dance and they’re so good. I think I’ll go to their next show on Sunday at the Mountain View a la Carte & Art Festival.”

As soon as The Groove Kings returned for the second half of their energetic performance, Carte was back on the pavement, grooving to the Kings’ music. Throughout the night, saxophonist David Gonzalez would occasionally travel through the crowd playing his sax and lead singer, Steve Siacotos would get off the stage and mingle with those dancing while serenading some of the women in attendance. In the middle of Stevie Wonder’s Sign, Sealed, Delivered, Siacotos delivered some news of his own by letting everyone know thirr San Jose Sharks had successfully beaten the Vancouver Canucks in game 3 of the Western Conference Finals. The Groove Kings ended the night with a rocking cover of Aerosmith’s classic tune Walk This Way.

Additional information on The Groove Kings including a calendar of their upcoming shows can be found at www.groovekingsband.com.