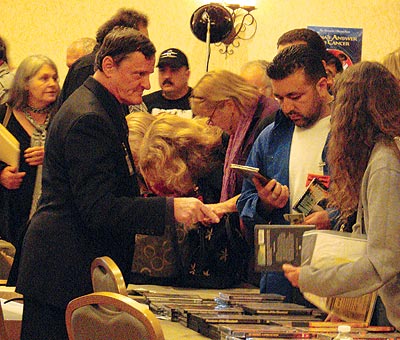 You have been brainwashed.

At least you have been if you believe much of what was said at this year’s Conspiracy Con. Held every year the weekend following Memorial Day at the Santa Clara Marriott and touted as the preeminent conference for everything conspiracy-related, the primary goals of Conspiracy Con are to “directly expose and analyze the “real” problems and the “real” problem-makers of yesterday, today and tomorrow, as well as to provide courses of action and potential solutions to the challenges that are placed upon humankind by these forces, which (for the moment) may seem invisible, perpetual and insurmountable.”

This year, much like in years past, Conspiracy Con welcomed some of the most controversial and outspoken members of the conspiracy movement.

When passionate people get together, there is bound to be some drama, and this year’s event had its fair share when two of the speakers, Dr. Leonard Horowitz and Sherri Kane, who work in tandem, accused another speaker, Anthony J. Hilder of being part of the government’s Counter Intelligence Program, or COINTELPRO, and alleged that Hilder and some of his colleagues are actually members of the Central Intelligence Agency infiltrating the ranks of conspiracy experts to bring disinformation and confuse the general public. Hilder countered by implicating Horowitz as a member of a secretive religious order called the Knights of Malta and stating Horowitz and Kane were deeply in love and having an affair. The mudslinging came to a head during the speaker debate, which capped off the weekend’s events. Neither side admitted the other’s claims and the attendees quickly grew tired of the he-said-she-said rhetoric prompting Conspiracy Con promoter Brian William Hall to step in and attempt to regain some sense of order to conference.

Some of the weekend’s topics included: September 11, 2001, the Illuminati, Satanism in the military, environmental sabotage and chemtrails.

Barbara Honegger, a former White House policy analyst and assistant to the president during the Reagan-Bush administration, discussed some of the discrepancies between the official story of what happened at the Pentagon on September 11 and personal accounts. Doc Marquis, a former member of the Illuminati who was trained to the level of a third degree witch, exposed much of the Illuminati’s presence in daily life from advertisements to many of the symbolisms found on the one dollar bill. Douglas Duane Dietrich, a veteran of Desert Shied and Desert Storm, talked about his time at the Presidio Military Base in San Francisco, and went into detail about some of the occult and satanic things he has seen firsthand. Leuren Moret, a geoscientist and radiation expert, showed evidence that the Fukushima earthquake was triggered and the plants’ cooling systems were sabotaged. She used much of her time discussing how the High Frequency Active Auroral Research Program, or HAARP, has played a role in many of the recent catastrophes across the world. Sophia Smallstorm and Hilder, in separate lectures, discussed the deadly chemical contrails, or chemtrails, from U.S. government airplanes. The substance sprayed from the aircrafts is said to pollute the environment as well as contaminate the air we breathe and food we eat. And perhaps one of the most controversial speakers, Stewart Swerdlow, explained how everything heard and seen in the media is a false, scripted and staged event. He even made the bold claim that we will soon see a completely staged alien invasion and second coming of Christ, which will lead to a new world religion and global empire.

Sound crazy? Perhaps, but conspiracy theories are nothing new and the desire to check facts and uncover the reasons behind some of the world’s largest events has been around for centuries. As the world continues to change, people are starting to trust the government and the official stories less and taking it upon themselves to research many of the disastrous events we encounter. Every conspiracy theory is birthed from truth, regardless of how small the main fact may be and, if nothing else, events like Conspiracy Con give a safe, controlled environment for like-minded members of the conspiracy movement to share their knowledge. The truth will always be out there and the information is easily within reach, but it is up to the individual to differentiate fact from fiction.