There are two new leaders at the helm of Vanguard Music and Performing Arts (VMAPA) this year. The organization, coming off a third-place finish at the Drum Corps International (DCI) Championships, has announced Brett Bernardini as its new Executive Director and Ivan De La Cruz as its Corps Director. 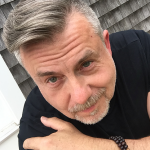 An accomplished pianist and vocalist, Berardini is the founder and CEO of The Spirit of Broadway Theater in Norwich, Conn., a member of the National Alliance for Musical Theater Board of Directors in New York and has been recognized for Excellence in Artistic Achievement and an Outstanding Arts Advocate by the State of Connecticut. At Vanguard, Bernardini will oversee the Vanguard and Vanguard Cadets corps, in addition to touring performance, local and community music and performing arts ensembles, and fundraising and community outreach activities, including Vanguard’s bingo program.

“I am honored to be here at Vanguard to build upon its remarkable history, to honor and celebrate those whose passion has brought us this far and to partner with the board of directors, alumni, members, volunteers, supporters, and the business community in building a dynamic future for the next 50 years,” said Bernardini. “I believe that the heart and soul of any vibrant, bold and relevant arts organization are its connections to the immediate community and region; how it interacts, listens and capitalizes upon its achievements to encourage community development, promote engagement, facilitate growth and foster exciting new opportunities. My background allows me to bring fresh eyes and ears to this prestigious organization and to help fulfill the board’s goal of realizing a bold, innovative and impact-driven vision.” 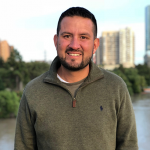 De La Cruz stepped into his role last month after serving as a longtime member of Vanguard’s visual team. A native of Texas, De La Cruz was a member of the Blue Knights Drum and Bugle Corps and The Cavaliers. After aging out of the drum corps program, De La Cruz served on The Cavaliers’ visual staff before joining VAMPA in 2011. Throughout the past five years, De La Cruz has been the Associate Director of Bands and Visual Program Director for the Dublin Coffman High School Band in Columbus, Ohio.

“Over the last nine years, [VAMPA] has become a home to me, and I can’t begin to express how honored I am to have this opportunity,” De La Cruz said. “Both the students and staff of the Santa Clara Vanguard hold themselves to a standard of excellence that is simply unparalleled, and I am humbled to be part of a group that is so rich in its traditions and educational values. I look forward to working in this new role and continuing to develop our program for years to come.”

Vanguard will hold an open house and meet and greet on Tuesday, Oct. 22 at 6 p.m. at the Vanguard Corps Hall, 1795 Space Park Drive in Santa Clara.