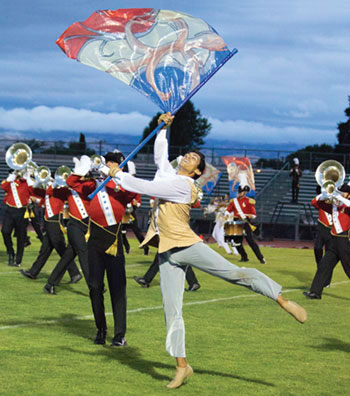 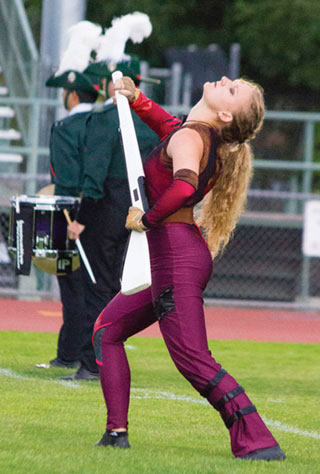 Now in its second year, Pacific Procession, a competition hosted by SCV, gives traveling and local corps another chance to perform ahead of the DCI World Championship at the end of the summer.

The Vanguard Cadets followed with “The Art of War,” a program “inspired by the universal emptions and experiences that have defined war since time immemorial,” according to the SCV website.

Pacific Crest (Diamond Bar, Calif.) was the first to perform in the World Class division. The corps performed its 2013 show, “Transfixed” and placed third with a score of 64.000.

Performing second was the Mandarins (Sacramento, Calif.), whose routine, “Destination America: Journey of the Paper Sons,” reflected the group’s Chinese heritage. The Mandarins placed fourth with a score of 62.100. 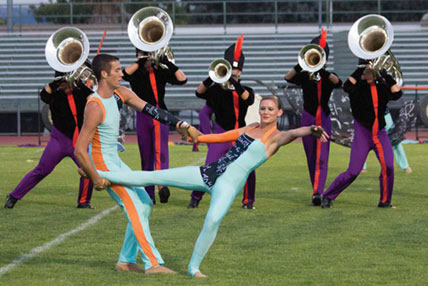 Closing out the night and performing the organization’s 2013 show – a routine combining the passion and drama of Victor Hugo’s Les Misérables – Vanguard’s routine was marred by a few dropped props, but well-choreographed and good enough for second place (75.400).

DCI West and Pacific Procession are the only competitions in the Bay Area this year. The corps will complete a west coast tour and travel to the south and east coast before arriving in Indiana for the DCI World Championship in August. Visit www.scvanguard.org for more information.

The Vanguard Cadets placed second out of three teams in the Open Class division at DCI West. The Cadets posted a score of 60.450, putting the corps less than a point behind the winning Blue Devils B group and over 16 points ahead of the third place Blue Devils C group. The Cadets scored 23.500 in General Effect, 18.550 in Visual, and 18.400 in Music.