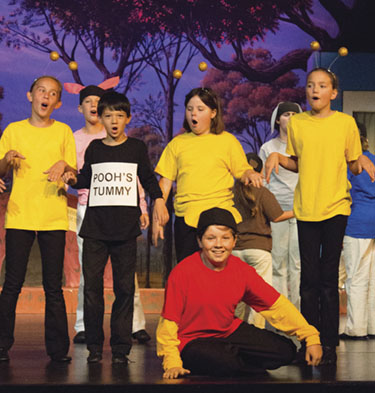 The darling performance told the story of how Pooh (Michael Kennedy) and his friends try to hide from, and capture, the evil Backsons – the dastardly devils who abducted Christopher Robin (Christopher Reader). Of course, Pooh is also on his eternal quest for some honey to feed his tummy (Tyler Penrod).

As part of their plan, Pooh and Piglet (Justin Wood) dig a ditch and cover it with a blanket, hoping the Backsons will fall into the trap. Unfortunately, they failed to tell their friends, and Rabbit (Maya Collins) becomes the first victim. Thinking she was captured and the Backsons will soon kidnap her, she tries to convince Eeyore (Elena Shain) to help her out with his tail. But, as fans of the Pooh tales know, Eeyore’s tail is pinned on and Rabbit is unable to escape. Soon, Tigger (Maddy Reader), Kanga (Abby Wheaton), Roo (Mateo Urquidez), Owl (Carley LaPlaca) and most of Pooh’s forest friends fall into the furrow.

However, when the forest works together, great things can happen and eventually they find a way out of the trap. Even though they’re happy the Backsons didn’t snatch them, they are still unable to find Christopher Robin and begin to fear they’ll never see their friend again. What they dodn’t realize though, is that what they mistook as “Backson” in their friend’s letter, actually read “back soon.” When Christopher Robin returns, the woodland animals rejoice and celebrate with a picnic. And, with Pooh’s tummy still grumbling for honey, he enlists the help of the bees (Genevieve Bumgarner, Abigail Caldwell, Megan Cella, Jacob Schmitz, Danielle Schmitz and Sean Wainzinger). By asking nicely, the bees agree to share their specialty with Pooh – and everyone else. There are happy endings for everyone and it becomes just another wonderful day in the Hundred Acre Wood. 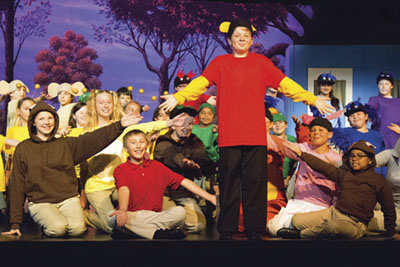 This production was a performance that would please all fans of Winnie the Pooh. With songs like “Winnie the Pooh” and “The Wonderful Thing about Tiggers,” children and adults alike left the auditorium singing the well-known songs. While there was no standout performance (although it’s tough not to love the adorable Penrod, Urquidez and bees), this was quite the enjoyable play. It’s a shame it was only produced for one weekend.

Congrats 2013 Scholarship Recipients
In addition to great performances, each year RJJT gives out three $500 college scholarships, which are awarded to outstanding participants. Applicants write an essay and are interviewed by the City of Santa Clara Parks and Recreation staff. This year, Kiran Grewal, Chris LaPlaca, and Kelli Vergano received the awards.