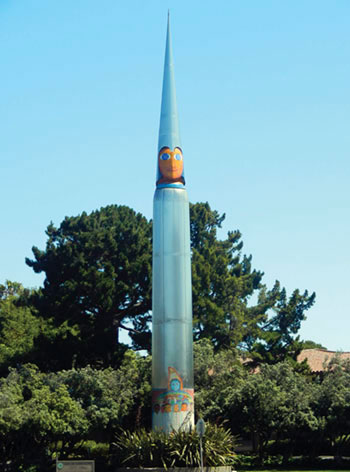 All residents of Santa Clara have seen it; the kooky and somewhat creepy monstrosity of artistic vision sitting at the corner of Warburton Avenue and Lincoln Street – right in front of City Hall. But where did it come from, and why is it still here?

In the same article, Austen Warburton, a member of the Statue Committee, repeated Burgess’ sentiments by saying, “the world recognizes the greatness of this man…who has a close place in his heart for Santa Clara,” and describing the piece as, “a project to live for centuries.”

The statue, which cost $50,000 to build, was brought to Santa Clara in January of 1964 in three separate pieces, and dedicated on February 29 of that year.

According to California History Volume 84, Number 3, from spring 2007, “This 85-foot-tall projectile of stainless steel, cast stone, and mosaic is undoubtedly a rendition of an intercontinental ballistic missile. Like The Expanding Universe [a statute Bufano created in Timber Cove, a city north of San Francisco], it was created in the aftermath of the Cuban Missile Crisis and was almost certainly influenced by that event.

“Near the top of the statue is the stylized face of a child and far below, near the base, is a mosaic of children,” continues the description. “Representing the races of the world, they stand shoulder to shoulder, in unison, looking straight ahead and smiling. An anthropomorphic figure, perhaps the Madonna, stands behind them, enveloping them in her embrace. And peering from just above her head and shoulders is the profile of a bird’s beak and wings. The bird is depicted as if flying up the sculpture and thus powering the missile on which the children are transported.” 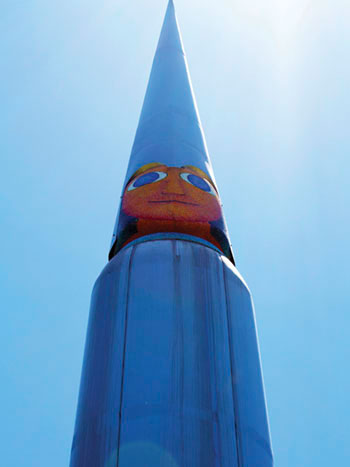 Prior to building the statue, Bufano was quoted saying, “Children see no color. A child has no malice, no flag…except that of the human race.” However, a Department of Parks and Recreation Historic Resources Inventory completed in July of 1981 somewhat contradicts Bufano’s statement about children. “An interesting aspect of the statue is the fact that all of the various ethnic children’s faces are smiling except the black child, who is frowning. This is due to the fact that the artwork was completed during the civil rights disturbances of the mid-1960s and the artist was illustrating the displeasure of the violence of this era.”

As to why the sculpture remains, “Bufano was San Francisco’s cultural mascot for nearly 50 years,” reads a profile in California People by Carol Dunlap. “Much of his work ended up in storage, whether through inadvertence of suppression. There were reports of vandalism, and the suggestion that Bufano himself may have been responsible…Most of his surviving work now belongs to the streets and the people of San Francisco.” Bufano is a local legacy, and whether or not the statue is seen as an icon or eyesore, Santa Clara has a Bufano original – a piece of free, public art for generations to enjoy.